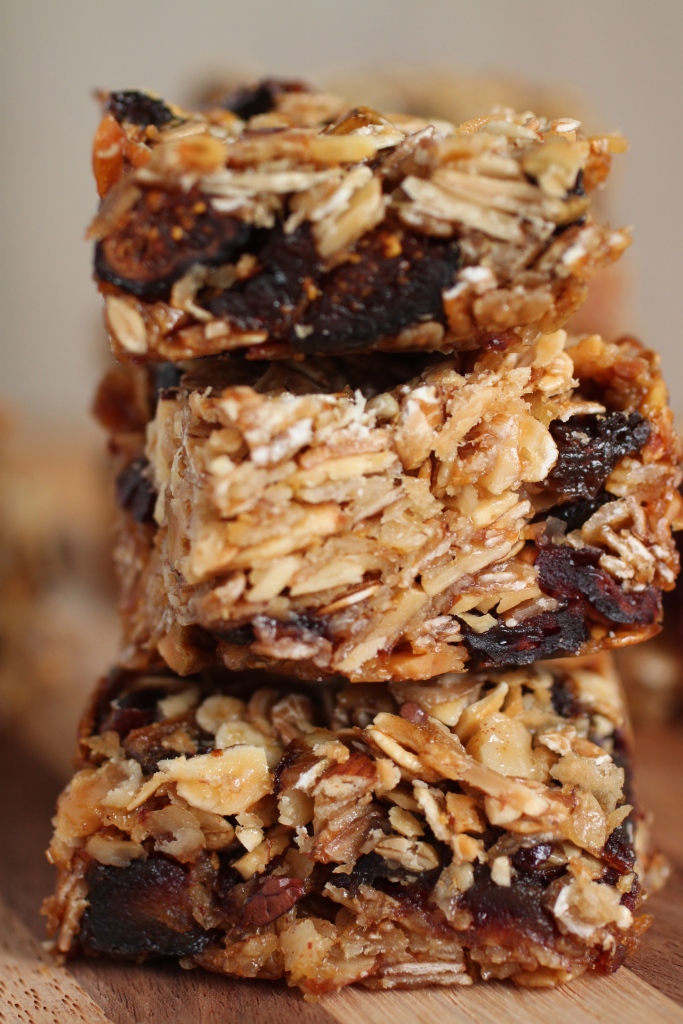 For what seems like forever, I have wanted to make my own granola bars.  When I had to pack lunches for the girls, I would buy them and occasionally, eat some myself, but a single glance at the ingredient list alway left me cringing.  Over the years, I have experimented with granola bars but most of the results just did not give me the chewy but soft texture I was hoping for.  My collection of recipes to try has grown quite a bit and when the Tuesdays with Dorie bakers chose to make the recipe for Granola Energy Bars in Baking Chez Moi, I happily baked along.

The recipe is fairly simple and does not have any tricky steps.  Toast, boil, mix and bake.  Simple ingredients, easy process, what more could a baker want?  The added perk, flexibility as far as what you put in the bars.  The only must, rice syrup something that most supermarkets with a natural food section carry these days.  My thought was to try different combinations of fruits and nuts to make a variety of bars to snack on.  The only thing I did not do was use rolled oats.  Trader Joe’s sells a whole grain hot cereal blend that is made of rolled oats, wheat, barley and rye. There is almost always a carton on the shelf in my pantry and I decided to use the blend rather than just oats.  Working with half the recipe amounts for each batch, I made one batch with dates, cocoa nibs, and walnuts, one batch with Trader Joes Berry Blend (dried cranberries, cherries, golden raisins and blueberries) with almonds and a third batch with mission figs and almonds.  For all of them, I included sweetened coconut and pumpkin seeds, substituted coconut oil for the butter and eliminated the sunflower seeds and the vanilla extract. 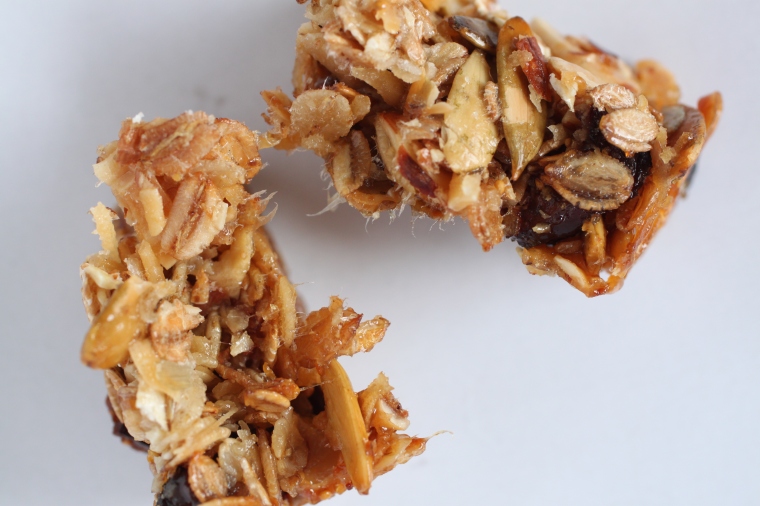 The mixture was easy to prepare and the three pans came together quickly.  My only wish, that somewhere in the directions it stated how thick they should be in the pan.  The dimensions of the pan is slightly uncommon and with my half batches, I was winging it and hoping that my 6″x 6″ were a good choice.  Since I have had such a problem with the oven temperatures in other recipes, I set the oven to 300F and it took a long time for them to bake, nearly double the time to get them a nice toasty color on top.  This may also have to do with the fact that I did not pretoast my rolled grains; I was hoping to keep them softer.

So what were my results?  Really chewy and almost hard bars that despite the different combinations of fruit, all tasted the same.  Because I did not want them to taste like vanilla, I left out the extract but now I wonder about whether I should have added something like cinnamon because they had an oily taste that must have come from greasing the pans.  In the end, I was a little disappointed with my results but will probably try them again with a full batch of the recipe and a little cinnamon or maybe some pumpkin seed oil and possibly a tiny bit of extract.  As for my husband, he couldn’t eat them fast enough and in a couple of days, had devoured at least half of the bars!

To see what the rest of the bakers came up with, visit the Tuesdays with Dorie website and look for the “leave your links” post.

13 thoughts on “granola energy bars; a tuesdays with dorie post”