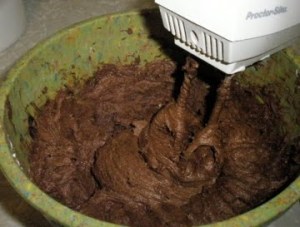 to do this properly, i have to work like a non pro. that means sometimes i have to do things differently than i normally would as a professional. take this photo, here i am mixing the batter with a dinkiest of hand mixers. it was a hand me down from a former employee in a past life. it struggled with the batter and i was skeptical that it would even make it to the finish. darry came into the kitchen and announced “i can’t smell the corned beef anymore because all i can smell is the motor on that thing.” once again, we were sharing the kitchen but at the moment, i had the counter and he had the stove top.

the layers came out of the oven looking perfect. they were completely level and looked like winners. but looks ain’t everything.
as perfect as they appeared, there simply wasn’t enough sugar in the batter. on to round two…

this time i lugged out the beast and mixed the batter with it. now i have been told that it is unreasonable to expect the user (the person who purchases and uses my cookbook) to make a major purchase in order to complete a recipe but this is one exception where i suggest you do just that. i am not being paid to say this so don’t think that i am getting anything for this but i recommend to anyone who is a frequent and adventurous baker to purchase one of these stand mixers. rather than list it as an expense, view it as an investment. these things are nearly indestructible and they last-mine is 20 years old and still working. we won’t mention the fact that i no longer have first gear and there is no such thing as a slow start when using it. and that fine layer of flour that coats the entire kitchen is just another sign of genius, isn’t it or so i keep telling myself.

the added sugar definitely improved the flavor but i think now that i need to adjust the leavener-they sunk slightly in the middle. after i make a trip to the store for more chocolate and a few other things, i’ll be ready for round 3.

having filled the dishwasher to capacity, again, i was forced to do the dishes by hand. lazy elves, they are never around when you need them.