have you heard the news? pie is the new big thing, the “it” girl of the dessert world for the new year. according to the folks who predict food trends, pie will be the number one food trend in 2011. honestly, where have they been keeping their heads? here in the south, pie is always a big thing! can you imagine a meat and three or a country market without pies? how about a potluck dinner? or a family get together? in little mom and pop businesses all over the south, whether they are restaurants or gas stations, if there is food sold, there is most likely some sort of pie-mainly a chess pie or some variation of one and if you are really lucky, fried pies. at the cafe, we generally have anywhere from 6 to 9 different types of pie to choose from daily. stop by today and you will find a house specialty-turtle pie. pictured above as it is being dressed for display, i start out with a homemade cookie crumb crust with nuts in it, fill it with a homemade caramel filling (sweetened condensed milk that is slowly cooked in the oven until it is a dark golden color) and topped with a semisweet chocolate glaze and pecan pieces.

here is a glimpse of the finished pies, all dressed and ready to party! don’t hesitate on this one, it really sells fast and since it can take a whole day to make them, i only make a batch when i can spare half of the oven for at least 4 hours-no joke, large quantities take a lot longer than you think!

this brings me to my next project. since the powers that be, you know the movers and the shakers of the prediction realm say that 2011 is the year of the pie, i am going to make pies. ooohhhhhh, something that i don’t do everyday…canning the sarcasm for a moment, i plan to make one pie each week for the next 52 weeks. each one will be an original pie and i will post recipes-something i very rarely do. the exciting part is that my final pie will land here during the week of thanksgiving. hopefully, you will bake along with me and share photos of your efforts. to anyone that does, i will post the photos here as well. just to get things moving, i baked a pie. a very special pie. pumpkin pie is one of my favorite pies. but that whole turtle pie experience (see above) had me thinking. what if i took a pumpkin pie and combined it with a turtle pie… 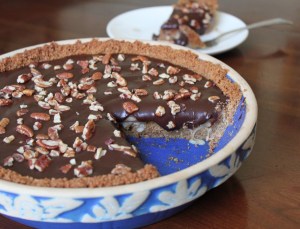 rich and gooey…spicy and creamy…too good to be true, but it is. first, i made a crust using gingerbread biscotti crumbs (homemade of course). i mixed up half of a batch of pumpkin pie filling and baked it in the crust. as it cooled in the fridge, i caramelized some sweetened condensed milk in the oven (using a water bath!). when it was done, i spread it over the top of the pumpkin filling. i let that cool over night and then this afternoon, i made a glaze using some semisweet chocolate. after spreading the glaze over the pie, i sprinkled on some toasted pecan pieces. sounds like a bit of work but sometimes, you just gotta do it!

preheat the oven to 350. combine the cookie crumbs, melted butter and sugar in a bowl and using your fingers, mix well to combine. press the mixture into a pie plate so that the sides and bottom are all evenly covered. in a mixing bowl, whisk the pumpkin with the brown sugar, pumpkin pie spice, whole egg and egg yolk. scrape the bowl, add the half and half and mix thoroughly to combine. pour the filling into the pie shell and bake until set, about 30 minutes. remove the pie from the oven (but leave the oven on) and allow it to cool a bit at room temperature. when the pie has cooled enough to handle it (just to make it easier to move around) place it in the fridge to get cold. place the pecan pieces in an oven safe pan and toast them for 5-7 minutes, allow them to cool and reserve them for decorating the pie.

pour the sweetened condensed milk into a 1 quart baking dish, preferably one with a cover. place this dish in a pan of water to make a water bath and bake. every 20 minutes, carefully open the dish and using a heat proof spatula, scrape the dish well and stir the mixture. this ensures that the caramel cooks evenly. it will take about an hour and a half for the caramel to reach a nice dark amber color. when it is finished, carefully pour the mixture over the top of the pumpkin pie and return the pie to the fridge to cool over night.

to make the glaze, place the chocolate and the half and half in a microwave safe bowl. using the lowest setting or the defrost cycle, heat in 30 second intervals until the chocolate is completely melted. whisk the glaze until it is smooth and spread it evenly over the caramel. sprinkle the pecans over the top and allow the glaze to set completely before cutting, about an hour at room temperature, sooner in the fridge. for clean cuts on your slices, dip your knife in hot water after each cut and be sure to wipe it clean before making the next cut. serves 8-10.

4 thoughts on “if it’s pies you that you want…”