Skip to content
this last week was one big bake-a-thon. cookies, cookies and more cookies…cranberry sauce, gingerbread trees, pie shells and of course, a pie for the weekly challenge. two pies, actually and they came out tastier than i would have thought possible.

gingerbread stars, chocolate cherry cha-chas and peanut butter granola cookies with chocolate chips were only a few of the cookies i baked. the gingerbread stars were stacked to form a tree and all were used to make cookie trays for friends and neighbors.
each year we travel to my cousin’s house in paducah, ky to celebrate christmas with his family. as we drive up i24, we pass a brown tourist sign for a place called patti’s 1880’s settlement…whatever, mumbo jumbo. it doesn’t matter, we don’t stop on this trip since it is only 2 hours and from what i have heard, it is a touristy place. anyway, i was curious about what it was one day a long time ago (we have been making this drive for 10 years) and i looked them up to see if maybe it might be a place to visit and in the process, i discovered that they are famous for sawdust pie. my capacity for remembering useless information sometimes helps me out and it was because of this talent that i remembered sawdust pie and thought i would try it for this week’s challenge.
virtually every recipe i encountered was the same-egg whites, sugar, graham cracker crumbs, pecans and coconut. can i just say that i am not a fan of graham cracker crumbs, at all. in the cafe, i have buckets of biscotti crumbs in several flavors that i make myself from biscotti that i make so i do not have to use graham cracker crumbs, ever. well, i decided to go ahead and follow the recipe, kinda sorta in my own fashion. we always have cinnamon graham crackers in the closet because you never know when it might be a smores night so i used them instead of the plain kind. the other changes i made were to toast the pecans and the coconut and add a little vanilla extract to the list. i followed the directions and was surprised that the outcome was a lot better than i expected. then i went on and made a chocolate version to test my theory that this pie can be made with many different combinations of crumbs, nuts and coconut. 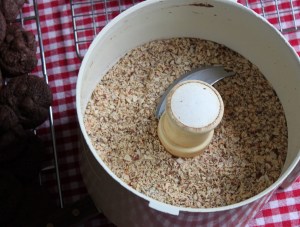 for the chocolate version, i used chocolate graham crackers and sliced, natural almonds which were first toasted and then pulsed in the food processor to make them more like sawdust.

chocolate and vanilla sawdust pies
the original recipe i used is here. the intro to the recipe mentioned whipping the egg whites but the directions said nothing about that. i looked at half a dozen recipes and none of them mentioned whipping the egg whites so i eliminated that and just whisked things together. we also did not bother with the suggestion of serving this with whipped cream and bananas-it was plenty sweet without that.
sawdust pie-1 (9″) pie serving about 8, adapted from allrecipes.com
if you use purchased whites rather than separating your own, use no more than 1 liquid cup, regardless of what the chart on the carton tells you-the pie will be dry with more than a cup. when you buy graham crackers, they have several packages in each box and one package will be enough to make the pie-grind that one package and measure out what is needed.
1 prebaked 9″ pie shell (refer to pie #2 for hints on this)
7 egg whites
1 1/2 cups sugar
1 teaspoon vanilla
1 1/2 cups graham cracker crumbs-any flavor
1 1/2 cups toasted nuts, pulse them in the food processor if they are large pieces
1 1/2 cups toasted flake coconut
preheat the oven to 350. partially bake the pie crust and toast the nuts and coconut if you haven’t done so already. place the pie pan on a sturdy baking sheet. in a mixing bowl, whisk the egg whites, sugar and vanilla until thoroughly mixed. fold in the crumbs, nuts and coconut and pour into the pie crust. bake until set, it will be slightly glossy on top and it will puff up and feel firm to the touch around the sides but the middle will be a little soft, about 45 minutes. allow the pie to cool before cutting.
my first pie round up!!!
imagine my surprise when i checked my email and found photos from a baker that had used my tamale pie recipe. it was a nice christmas present, even better was the fact that her family enjoyed the pie.

jennifer maier and her daughter made the pie together and it was well received by the family.

looks delicious, by the way, my family devoured it too! great job jennifer, i look forward to more photos, hint hint…
to anyone that cares to bake along, send me photos and i will post them. email me at bakinbabe116@aol.com and your photos will be added to the next entry. have a safe and happy new year!

One thought on “sawdust pie, #4 of 52 and the first round up photos”