Skip to content
it seems that winter has decided to stay here for a while.  we have had another round of snow and it gave me a chance to play in my own kitchen for a change.  when i was working on my book last year, i developed this recipe.  since there were more recipes than needed, it was cut from the list of recipes to be included and it has been lurking in the background ever since.  normally, i wouldn’t make something like this-i do try to behave on occasion.  but something about cold, snowy days made me think of fried cherry pies.  and as a result, i just had to pull out that recipe and make them.   enough time had passed that i was completely unfamiliar with the recipe and any of it’s quirks.  the beauty of it all is that there aren’t any quirks and no corrections needed to be made to the recipe meaning that i done good the first time!   tart red cherries can be hard to find.  if you are the sort who doesn’t mind buying large quantities, they can be found online in quantities of 5-10 pounds but they are frozen and the extra expense of the shipping made them undesirable to me; i decided to use the canned cherries i found at the supermarket.  honestly, you could use any fruit you like here-just adjust the flavorings and the sugar as needed and if you are short on time, you could use a premade fruit pie filling.

i made my dough the day before and then took it out to soften.  when it was ready to be rolled, i grabbed my high dollar cutter (an empty family size soup can) and the biggin (my favorite big rolling pin) and i rolled out all of the dough circles.  i also made the filling in advance so i was able to then start filling and sealing the pies.  in the mean time, the oil was heating on the stove in my cast iron skillet.

***a note of caution to all who dare to make these pies, never walk away and leave a pan of oil heating on its own!  it is very easy to overheat and a fire could easily be started!!!  if you do not have a fire extinguisher, consider adding one to your kitchen***

use a thermometer and a cast iron skillet for the best heat management-the thermometer will let you know if the oil is too hot or too cold and the skillet holds the heat making regulating the heat easier.  have your pies ready and near by and also have a place to put the cooked pies close by too.  i used a cooling rack on a sheet pan.  a pair of tongs will be very helpful-the ones like they use in restaurants are a good choice and easy to find.

after you have fried all of the pies, make the glaze and drizzle it over the pies with a spoon.   then stand back and watch them disappear! 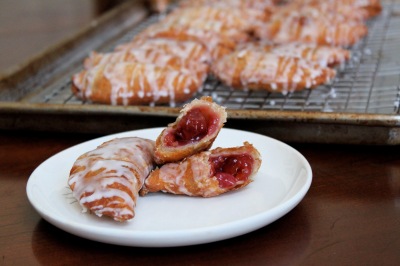 fried pie dough
1 ½ cups all purpose flour
¾ teaspoon salt
6 tablespoons unsalted butter, cold and cut into cubes
1/3 cup buttermilk (you may need a little extra)
1 egg yolk
place the flour and salt in a mixing bowl and whisk them to combine.  using a dough cutter,  two knives or your hands, cut the butter into the flour mix until you have small pieces and the flour resembles coarse meal.  combine the buttermilk and the egg yolk and pour it over the butter/flour mix.  stir it together to form a firm dough adding additional buttermilk if it is too dry and crumbly.  shape it into a patty, wrap it in plastic and allow it to rest in the fridge for at least an hour and up to 3 days or you can freeze it for as long as a month.
tart red cherry filling
2 (14.5oz) cans tart cherries in water
½ cup sugar
½ teaspoon almond extract
¼ teaspoon cinnamon
¼ teaspoon red food color-optional
3 tablespoons all purpose flour
place the cherries and the juice into a sauté pan with the sugar, extract, cinnamon and the food color if you are using it.  bring it to a gentle boil over medium-low heat and simmer until the liquid is reduced by 2/3.  sprinkle the flour over the mixture, stir it in and return it to the boil for at least 1 minute to cook the flour.  place the filling in a heat proof dish, cover and chill completely before using it.
assembling and frying the pies
flour for rolling the dough
1 egg mixed with 1 tablespoon water
enough oil to fill a  10” cast iron skillet 1-1 ½”  deep, (i used 3 cups canola oil)
1 cup powder sugar
2-3 tablespoons water
cut the dough into 2 equal pieces.  roll out the dough a bit thinner than you would for a pie, somewhere between an eighth and a sixteenth of an inch.  using a 4” cutter, cut as many circles as possible by positioning the cuts close together.  do not worry if some of the circles overlap slightly or if you have imperfections, it is not crucial to have perfect circles.  repeat this with the other half of the dough.  there should be about 12 circles at this point.  gather the scraps, pat them together and roll the dough out again.  you should get about 6 more circles.    place the oil in the skillet, attach a thermometer to the side of the  pan and heat to 350 over medium low heat.  while the oil heats, place a few circles of dough onto your work area, brush off the excess flour and place a scant tablespoon(almost a full #50 scoop) of filling in the center of each circle.  brush half of each circles edge with the egg wash.  fold over the dough and seal it shut with your fingertips first and then with the tines of a fork to be certain the seal is firm.  when the oil is at temperature, carefully lower 3 to 4 pies into the oil with out splashing.  allow the pies to fry on each side for 2-3 minutes or until a nice golden brown color is achieved.  turn them carefully so that you do not splash oil.  lift the pies out of the oil and place them on a rack to drain.  fry the remaining pies in the same manner.  to make the glaze, sift the powdered sugar into a bowl and whisk in the water to make a smooth icing.  drizzle the icing over the pies with a spoon.

any of you adventurous sorts out there that want to try this at home, please do and then send me a picture(bakinbabe116@aol.com) and i will post it here, a round up if you will for anyone who dares…