last monday, i grabbed my overstuffed carry-on bag and headed to the airport with jesse for a few days of media training in new york city and philadelphia.  first on the agenda was to check in to the flatotel for our stay in manhattan.  with that out of the way, we quickly headed out in search of lunch-trickier than it sounds but only because there were simply too many choices!

we chose the brick lane curry house and were quickly seated.  as we perused the menu, i took a few photos.

the place isn’t much bigger than the photo suggests-maybe 8-10 tables and at the time, we were the only two people in the place.

love the use of colanders as a light fixture!

we ordered prawns tikka masala for me and prawns goan for jesse.  it was all accompanied by curried vegetables, dal, rice and naan.  all of it was incredibly tasty.

nothing says i enjoyed lunch more than an empty plate
at this point, we headed out into the rain and began our first adventure-the acquisition of an umbrella for jesse…this was followed by a stop in the moma shop and a stop at the hotel for rain jackets which we both thought to bring.  after a stop in a bead shop and for a drink (well we were off the clock so why not…) we headed to our final destination-eataly and it was only 30 blocks away…
the first thing i will say about eataly-overwhelming.  too much going on in one place to take it in in an hour.  too many people trying to do the same thing as you and also finding themselves overwhelmed-lots of stopped traffic in other words.  the second thing, with all of the potential this place has to wow you, it’s a bit disappointing that you aren’t.  most of what i saw was familiar to me and nothing seemed truly unique.  as jesse stated, i can eat proscuitto anywhere-proscuitto is proscuitto.  nothing reached out and grabbed me and yelled at me to try it.  we did indulge in gelato and i can only ask that they give a little more for the price.  even so, i really enjoyed the coconut gelato and the fig sorbetto that jesse had was equally wonderful.  with that said, here are some photos from our trip into eataly. 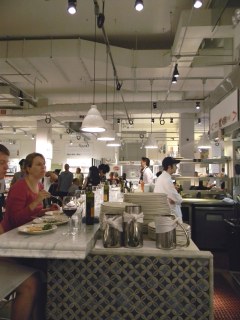 jesse and his $17 glass of red wine-the moral of the photo, never ask the person selling the wine to pour you a glass of their favorite wine…

we sat outside and indulged ourselves in mussels and salads and then called it a night, at least i did.  it was off to bed for me and i slept like a rock!  but wait, there’s more to the story!  look for it tomorrow-my adventures with undercover steve…