Skip to content
is anybody else as tired of winter as i am???  snow in atlanta and birmingham, single digit temps in nashville for days, when will it end.  as i look out the window this afternoon, bright sunshine and a blue sky greets me.  the bees, which thankfully survived the deep freeze, are all over the area around the hive and my teeth are no longer chattering.  one can only hope it lasts longer than a day but this is nashville and we aren’t known for having a steady forecast.  as the saying goes, give it ten minutes, the weather will change…
in my quest for warmth, i pulled an old favorite off the shelf, the italian baker by carole field, and decided that a loaf of freshly baked bread might be the best way warm up.  the scent of bread baking always makes the house seem warmer, more cozy and as cold as i was, i was thinking it would go well with the soup i had simmering on the stove.  and if i was lucky, i might actually feel a little less cold.
pane pugliese is a crusty loaf of bread traditionally baked in huge, 2-4 pound loaves.  the simple, rustic loaf is a blank slate in a way and it is easily paired with just about anything.  the loaf i made went just as well with soup as it did in a tuna melt.  and when i mixed up a green salad with olive oil and balsamic vinegar, it was perfect for sopping up the last bits of the dressing and feta cheese in the bottom of the bowl.  the recipe calls for using both yeast and biga.  for those of you not familiar with biga, it is a traditional italian sourdough starter.  to make my bread, i used my five year old grape starter in an equal proportion with excellent results.

the recipe cautions that the dough is a wet one requiring “incredible skill and an extraordinary amount of flour when done by hand” and i would agree.  use your stand mixer and make quick work of it.  of course, 5-10 minutes of machine mixing and kneading is nothing to complain about but the stickiness of the dough is, so just go ahead and use the machine.   mix the dough with the paddle until it comes together and starts to pull away from the sides.  after the initial mixing with the paddle, the dough is very wet and more like a thick batter. 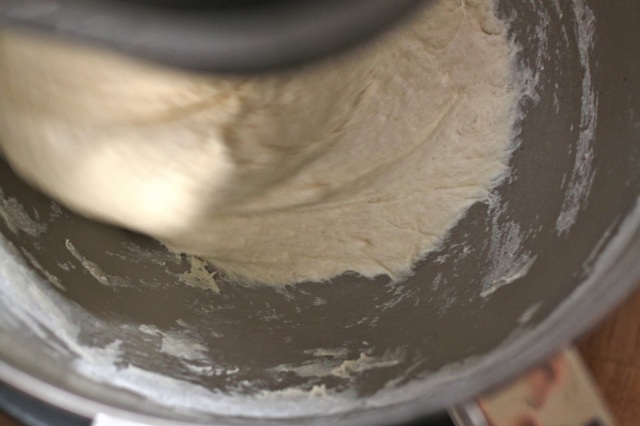 once all of the flour was added and i switched to the dough hook, i could see that the dough was still very moist.  although i added additional flour, it never really came off the bottom of the bowl which is exactly what the recipe states.  the kneading time at this point is only 3-5 minutes and i am pretty sure i went the full 5 minutes which is rather short for most sourdough breads.  the instructions suggest scraping the dough out of the bowl and kneading it by hand with plenty of flour until it loses its stickiness.  do that, please.  that sentence in the instructions starts off with the phrase, “if you want…”  and i did not want to hand knead.  for once, i wish i had; the dough was so sticky that it coated my fingers and required a vigorous scrubbing to remove.

it is a soft dough that seems incapable of holding shape.  but do not let that fool you.  this dough is about to undergo a major change during the first rise.

when the dough had tripled in volume, it was poured, yes, poured out onto a generously floured work surface to be shaped.  if i was skeptical before, i was certain at this point that the bread was going to be a flop and that i had just wasted my time.

you can see how bubbly and soft it is-the shine is part olive oil and part moisture level in the dough.

even so, i trudged on towards what i hoped was a respectable loaf of bread.  first note about shaping; do not punch the dough down, you want some of the bubbles to remain for the final rise.  to shape it, the instructions call for flattening the dough and rolling it up using your thumbs to make a somewhat tight roll.  the dough is so soft that it is a bit challenging to make the roll tight without tearing the dough or puttin your thumbs right through it so handle it carefully to prevent that.

after completing the roll, the dough is flattened again and rolled up a second time.  this time, it is a little less soft and it will actually resist the rolling a little.

after the second roll, the loaf is shaped by cupping your hands and smoothing the dough from top to bottom in a circular pattern.  the idea is to pull the dough tighter as you run your hands around it from the top to the bottom.  don’t stress on this, if the shape isn’t perfectly round, that is okay.  once it is baked, no one will ever know.

after the dough is shaped it is placed on a floured pan to rise.  after doubling, it gets a vigorous dimpling with your finger tips to control the oven spring.  the dimpling almost seems pointless because the dough is again allowed to sit for 10 minutes.

after 10 minutes, it is hard to see where it was dimpled-it has risen again in many spots.  at this point, i began to wonder if maybe my starter was a little too powerful.  the yeast in my starter came from grapes in the garden i work in and has proven itself to be rather potent in the form of leavening bread.

even after a good poking, the bread popped up into a nice round loaf.  the internal temperature is a good way to check for doneness and once it reads 205-210 degrees, the loaf is done.  allow it to cool on a rack for at least an hour before slicing.  one final note, i only made half of the recipe!

pane pugliese
one large loaf of bread
adapted from the italian baker by carole field
slightly less than 3/4 teaspoon of active dry yeast
2 tablespoons warm water
1 1/2 cups water, room temperature
100 grams of sourdough starter, about 1/3 cup
3 3/4 cup unbleached all purpose flour
2 teaspoons salt
cornmeal for the peel
using the bowl for a stand mixer, stir the yeast into the warm water and allow to stand until creamy, about 10 minutes.  add the remaining water and the starter and mix with the paddle until blended.  add most of the flour and all of the salt and mix until the dough comes together and begins to pull away from the sides of the bowl.  switch to the dough hook and on medium speed, knead the dough until elastic and smooth adding flour by the tablespoon as needed.  the dough will never fully come off the bottom of the bowl so do not panic!  the kneading should take 3-5 minutes.  flour the workspace and scrape the dough out into the floured area.  knead it for a minute until it is not sticky and is soft and velvety.  place it in a well oiled bowl and let it rise until tripled, about 3 hours.
to shape the dough, flour the workspace well and have plenty of flour handy.  do not punch the dough down, just pour the dough out onto the flour and flatten it.  roll it up using your thumbs to make it a tight roll and then repeat this process using the photos above as your guide.  shape the dough into a ball and let it rise, covered with a towel on a well floured board or pan until doubled, about 1 hour.  at this point, get your oven ready by preheating the baking stone if you use one to 450 F.  ten minutes before baking, sprinkle flour over the dough and dimple the entire loaf with your finger tips.  let it stand for 10 minutes.  sprinkle cornmeal over the peel and turn the bread out onto the peel, flipping it so that the bottom is now the top.  slide the loaf onto the heated baking stone and bake until a deep golden brown and the internal temperature is between 205 and 210 F, about 50 minutes.  cool on a rack for at least an hour before slicing.
look for additional posts for the starter and the soup including recipes and links.  and one final note, i may be dating myself here but do any of you remember way back when on general hospital when mikkos wanted to control the weather and freeze the world?  while i never watched the show, but i heard all about it (how could you not-the world was in love with luke and laura and they were all you heard about) and just wanted to suggest that someone go ahead and build that machine and tweak it a bit so we can turn off winter, please…
and just in case you have no clue what i am talking about, here is a link to explain the plot line from general hospital and how they planned to control the weather.