When we packed up and moved from Nashville to Williamsburg, we took the pets with us.  Two of our cats were indoor cats but the third one, he was a wanderer and a hunter; converting The Captain to a life indoors has been tough.  If he sees a chance, he makes every attempt to get out.  The biggest problem we face is his need to sharpen his claws.  When he was going outdoors, he needed those claws to defend himself, not anymore.  Unfortunately, he still feels the need to sharpen them and it is taking a toll on things here.

Our living room has a vaulted ceiling that is supported by columns.  He marked one pretty quickly. 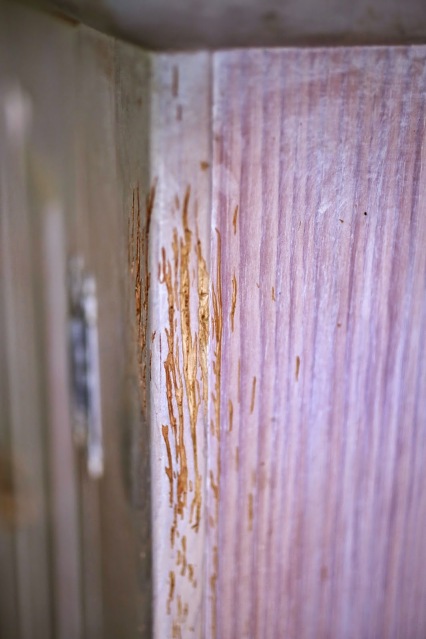 If you thought cats could do damage to just soft things, think again.  This is a solid wood cabinet and look at the damage he has done to it.  At some point, I will have to sand that out but it will require a complete refinishing since it was stained at least 20 years ago.

This is the door way to the bathroom.  He made quick work of the new paint on the jamb. 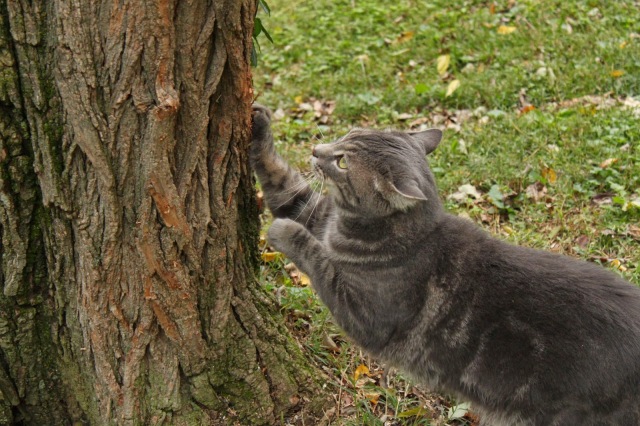 Here he is in our previous yard going to town on a black locust tree.  If you look closely, you can see the areas of the bark that he marked as they are a different color.

If we were going to live together successfully in this new home, I needed to give him something to call his own for sharpening his claws.  My decision was to build a box that would go around one of the support columns and then to cover it with a natural fiber rope to mimic the rough texture of the tree bark he was accustomed to. 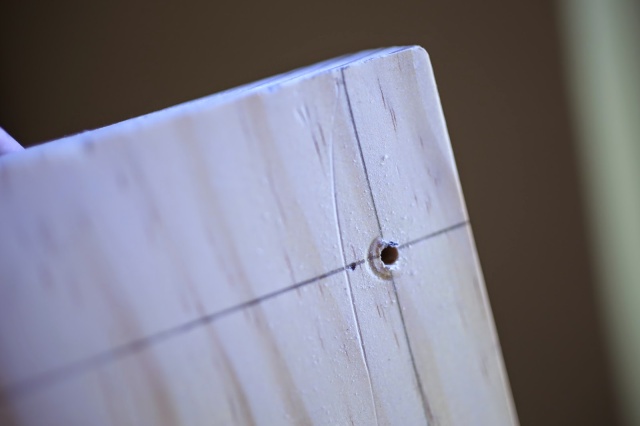 After wandering the lumber aisle at Lowe’s, I asked one of the guys working there to give me some advice.  We settled on precut shelving made of pine which is a soft wood but more than capable of forming the frame of the scratching post.  If you visit Lowe’s, they sell 4′ shelf boards, a little longer than I wanted but in the end, it meant that I would not be stuck with a bunch of leftover wood.  Since the column is rectangular in shape, I chose two 4’x10″x1″ boards and two 4’x8″x1″ boards.

Have you ever heard the saying, “measure twice, cut once?”  So that I wasn’t going back to Lowe’s to buy more boards, I measured carefully before I drilled holes.  My plan was to make three holes and attach the boards at the corners by putting a screw completely through one board into the end of the board next to it.

If you look closely at the photo, you can see how I joined the boards.  Once the box was assembled, I began to apply the rope. 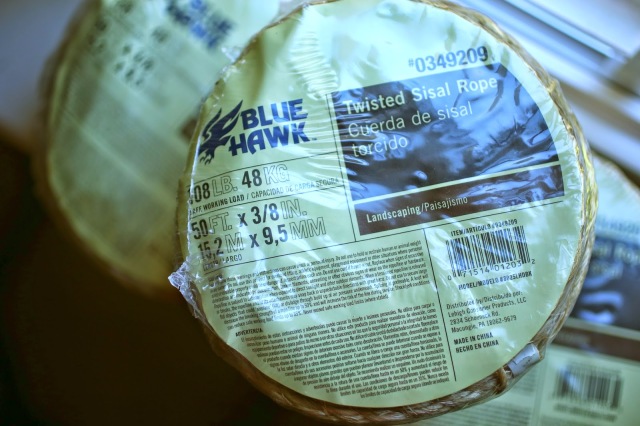 Look at all of the fibers-nice and rough and barklike! 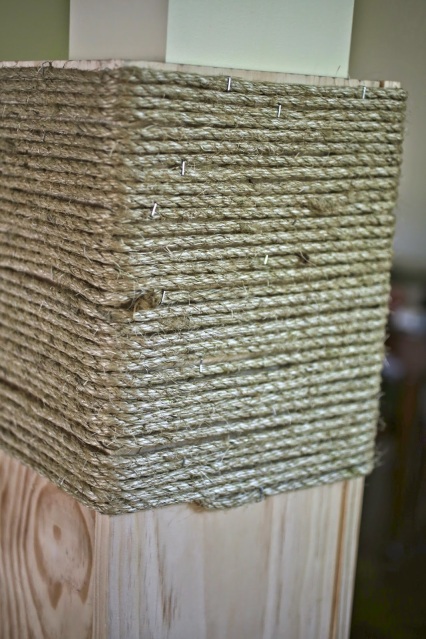 Initially, I used a staple gun to attach the rope.  It did not work very well, most of the staples would not go into the wood and I spent a lot of time pulling them out.  It was very frustrating!  On my next trip to Lowe’s, I picked up poultry staples.   They need to be hammered in but once they are in, they aren’t coming back out easily.  The staples would bend and go in so unevenly that some could be pulled out with my fingers.  In order for this to work, the cat needed to put his full 15 pounds behind the act of sharpening his claws without the staples popping out.

The post took a lot more rope than I thought it would.  So far, I have wrapped it with seven 50′ coils and I still need at least 1 more.  The good news is that he will go to it and sharpen his claws.  We still need to work with him on this, he is not using it exclusively but he is using it.  If it means I will not be refinishing every wood surface and replacing furniture in the house, it is a success.  The down side, it is not a cheap project.  The rope is $9 per coil plus the cost of the lumber.  In my opinion, if it means less damage, it is cheaper than a new couch!

The Captain in his former life in Nashville.  Doesn’t he have such pretty eyes?