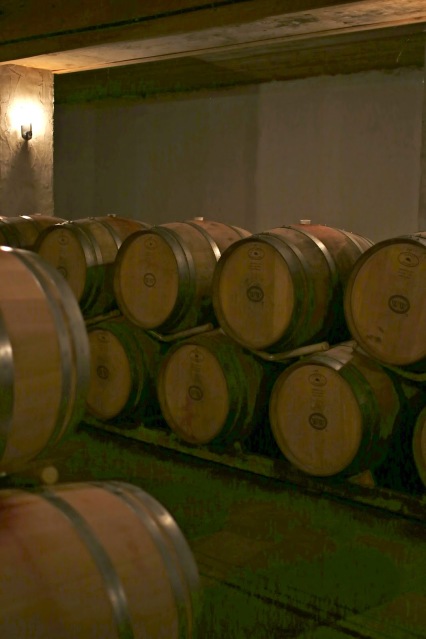 When my daughter came for a visit recently, we decided to taste some of local wares.  Our first stop was at the Williamsburg Winery.  For those of you who are not familiar with wine production, Virginia wines are gaining ground and winning awards.  Hard to believe but it is true, Virginia is the fifth largest grape producer in the nation.  Still don’t believe me, read this article from Forbes magazine about the wine industry in Virginia.

While it is no secret that I prefer to sip a glass of wine (or three…) to just about any other alcoholic beverage, I am by no means a connoisseur.  My preferences run to dry whites such as Sauvignon Blanc, Fume Blanc and Pinot Grigio, my only requirement besides dry and white is that it is not Chardonnay.

Even so, I always enjoy a trip to a winery and a chance to see how they produce their wines.  When it includes a chance to taste the wines, even better.  The tour of the Williamsburg Winery will take you about an hour, including the tasting.  While some wineries do this for free, it will cost you $10 to take this tasting tour.  If you ask me, that is a pretty cheap way to sample the wines and see the facility.  Forgive the lousy cellphone photo, it was so dark in the cellar and I was traveling without a tripod.

This is a small winery in comparison to some of the ones I have visited on the west coast.  This room is where they store all of the red wines.  Again, I apologize for that cellphone photo.

Each Barrel is marked with a stamp from the cooper.  Coopers practice the art of making wine barrels, and this cooperage from France.  The other stamped letters and numbers also convey information relevant to the barrel.  While I do not know what the A or the H mean, I do know that the M and T refer to a Medium Toast of the barrel which will impart characteristics to the wine aging in the barrel.  The white, handwritten letters are unique to the winery and I am not sure what they mean but I am guessing that the indicate the type of wine and the year it was produced. 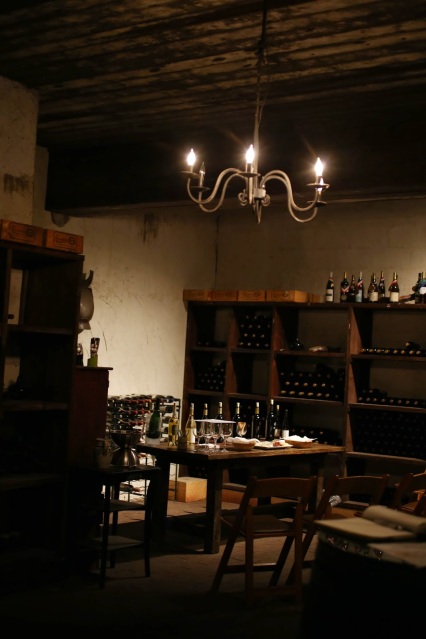 The winery offers different types of tours, we went on a basic tour but they also offer a reserve tour.  The reserve tour includes a tasting in the actual cellar.   We could only admire the setting from behind a gate and I am thinking this looks like a great place to learn about the wines. 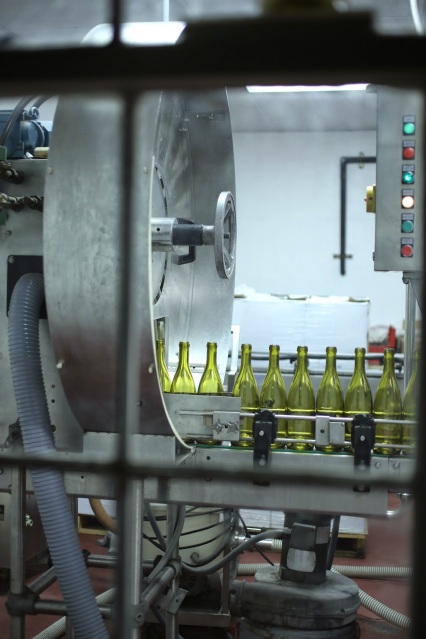 In the bottling room, Riesling was being pumped into the bottles.

The storage tanks in the winery, just another interesting part of the winery.  The art of wine making has been around for centuries and while old world techniques are still in use, modern technology has crept in. 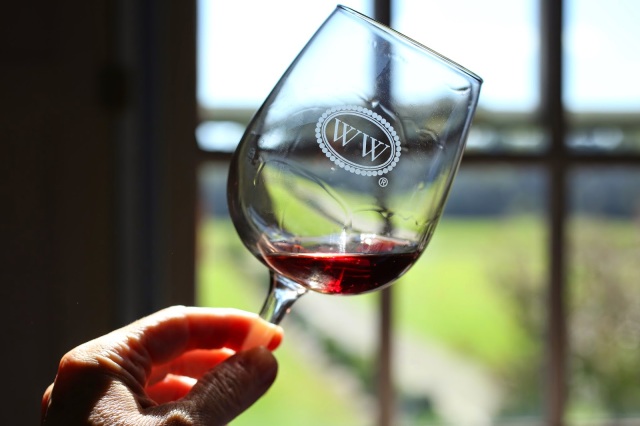 Of course, just about everyone goes on a winery tour to taste the wines and I am no exception to that rule!  We tasted eight wines and this was one of the reds, a 2012 Lord Botetourt Red which is a blend of red Bordeaux varietals.

We also had the chance to taste the 2013 Dry Rose(a wine made from estate grown grapes), 2012 James River White Sauvignon Blanc, 2013 Midsummer Night’s White (a wine made from estate grown grapes), 2010 J. Andrewes Merlot, 2012 Hening’s Statute Cabernet Franc, 2012 Virginia Trianon (a Cabernet Franc)  and the Jamestown Cellars Settler’s Spiced Wine which is a spice infused red wine that can be served warm or chilled.

While we enjoyed the winery and the chance to taste the wines, we had a schedule to keep and beer to taste; off we went to the local brewery Alewerks.

Disclaimer; I am not a beer drinker, do not expect a detailed explanation of anything here…We arrived at the brewery which is located in a small business park, not what we expected, at all.  Once again, this was not a free tour, and that is fine, they need to pay for the expense of educating visitors.  We were lucky to have a tour guide that not only knew his ales, but was engaging and entertaining.  For the first time, I actually understand a little about the different types of beers and what makes each one unique.

Our guide, Corbin, was quick to explain something important to us, traditionally, beer is made from 4 ingredients:  water, barley, hops and yeast.  What I also learned was that there are two basic types of beer, lager and ale, and what separates them is the type of yeast used and the temperatures that they are brewed is the biggest difference.  Alewerks only produces ale and that is a cold yeast process.

What makes the many brews different are the ingredients used.  While barley is the traditional grain used to make ale, it is not the only choice.  How the grains are toasted affects flavor and so does the amount of hops in the brew.  The other thing I learned, I do not care for a brew that is heavy in hops.

We tasted 5 different brews which included the Chesapeake Pale Ale, Washington’s Porter, Wheat Ale and Old Stitch-forgive me, I cannot remember the fifth one.  The light ales and the less “hoppy” brews were the ones I preferred.   Believe it or not, I actually like the Porter and probably could drink a glass. 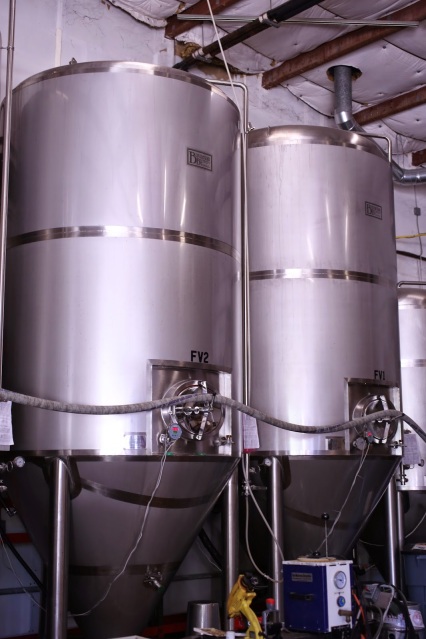 After the tasting, we went to the actual brewery.  It is surprisingly small.  The entire brewery is in one room; the grain storage, brewing and bottling all takes place in the same space. 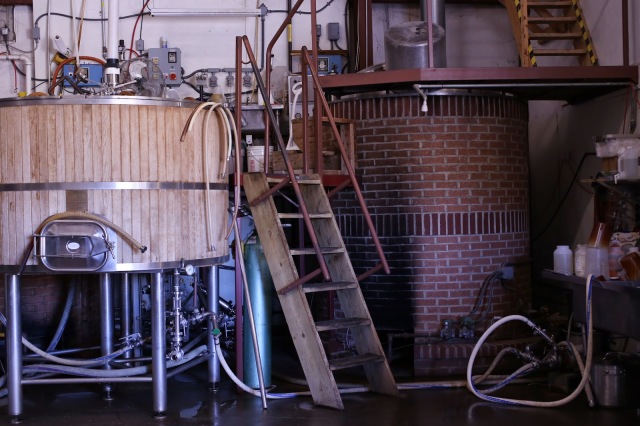 The bricks look blackened because it is actually soot from the flames that toast the grains.

Even more surprising, there is only one machine to bottle the brew.  This machine has the ability to bottle one case of beer per minute.  The cases are folded and glued by hand too.  Yes folks, this beer is truly hand crafted.

Still thinking of the Porter, and thinking that maybe I need to go back and take this tour again.  Join me and help support the local producers of Williamsburg.

2 thoughts on “beer vs. wine; visiting a brewery and a winery in one afternoon”