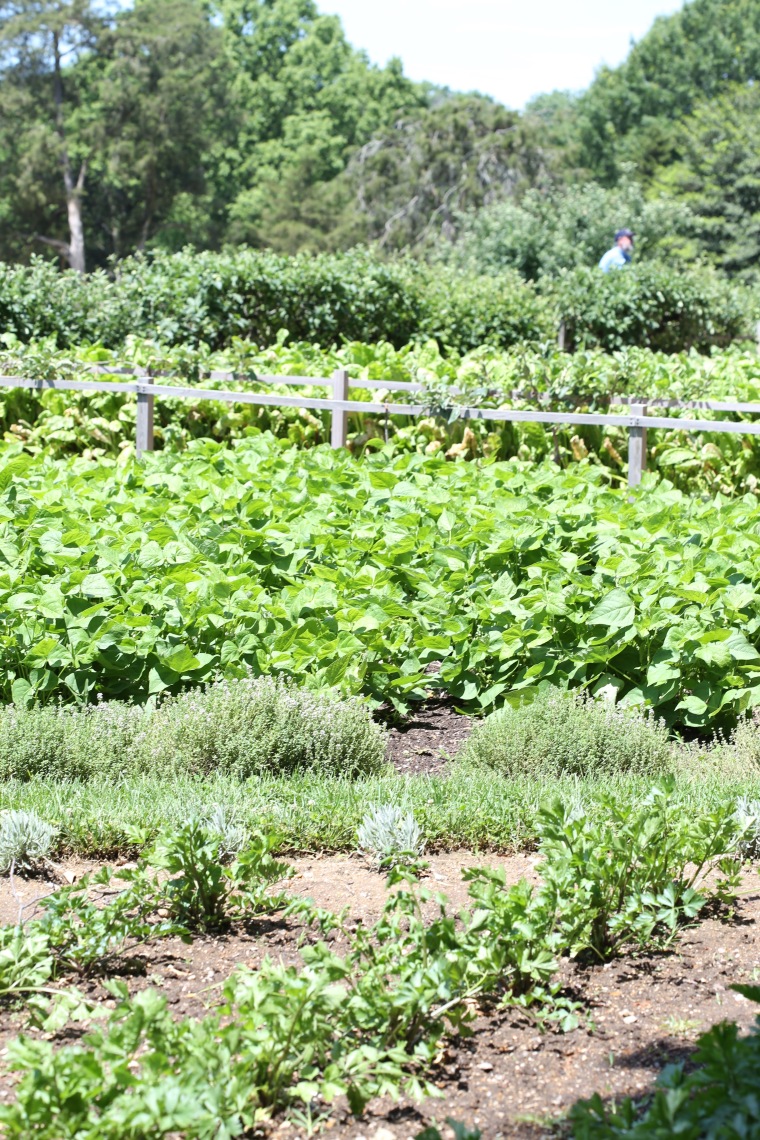 Mount Vernon is about 140 miles from our home in Williamsburg and that may seem like a bit of a drive to walk through a bunch of gardens, but to two gardeners, this was the perfect way to spend a beautiful sunny day.  If you plan on taking the trip, do yourself a favor and purchase your tickets online at least 3-4 days in advance.  Not only will you save $3 per adult, you will have the option of choosing a time for your visit to the mansion and if you are willing to spend a little extra, you can also purchase tickets for the special tours.  We booked our entry tickets online and purchased tickets for the Gardens and Groves tour and started our visit with a guided tour of the upper and lower gardens.

The sun was pretty harsh and it made taking photos tricky but I managed to get a few!  The photo above is of the lower garden.  George Washington was very meticulous in many aspects of his life but unfortunately, he did not keep good records of his garden and for the people in charge of keeping them, they have had to do a lot of digging for clues and a lot of guessing based on what was available at that time. 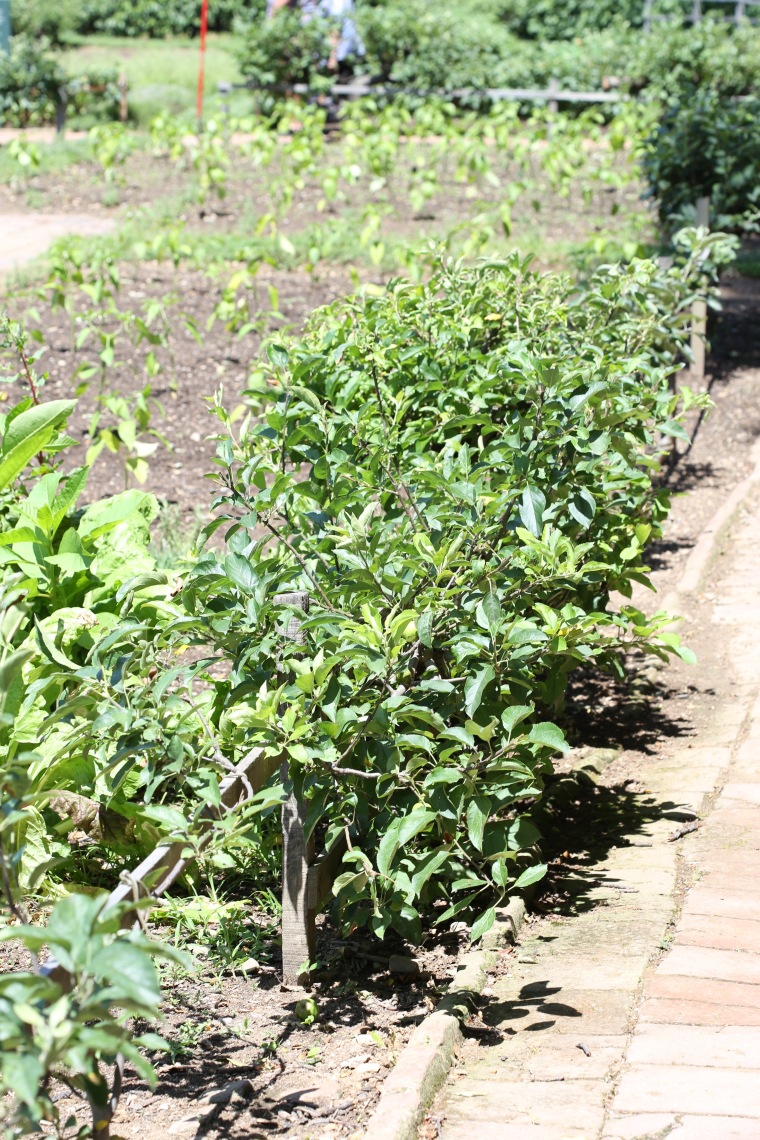 In the lower garden, most of the beds included fruit trees grown in the espalier style.  Some were trained to grow up against walls and others, like these apples, were grown as a living fence for the garden. 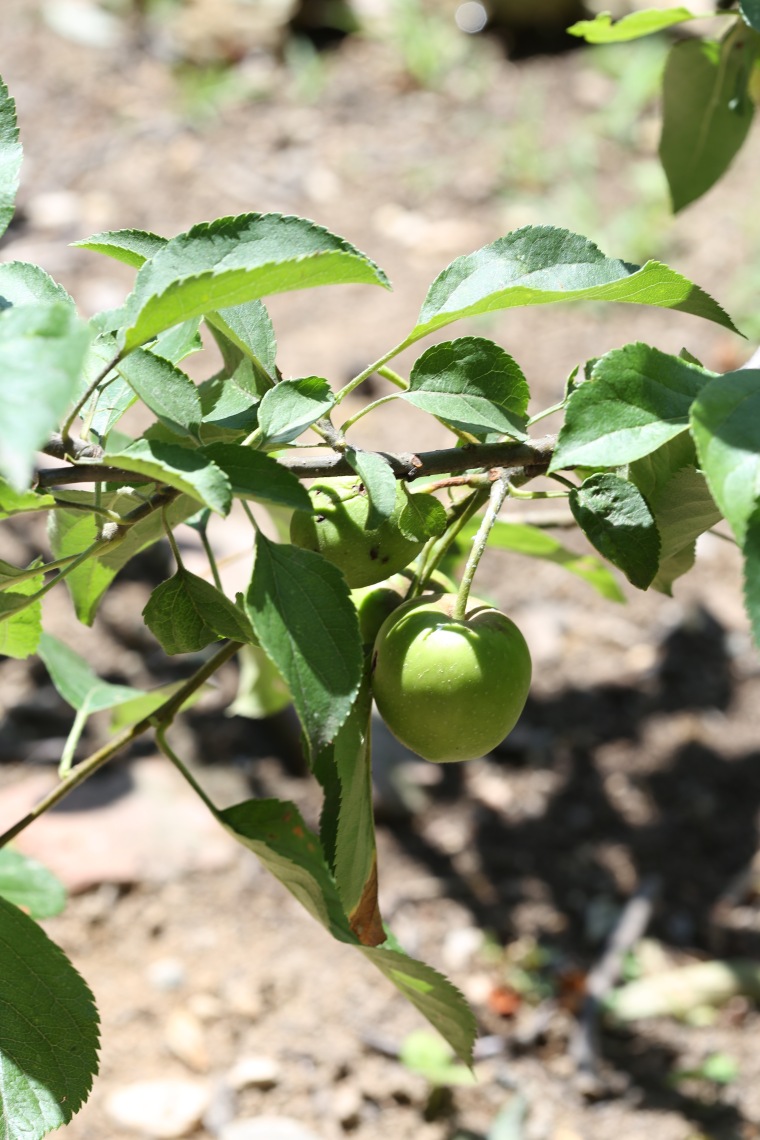 There were so many apple trees-I was truly jealous!

This trellis looks a little intimidating but it is easier to construct than you might think.  There weren’t any plants growing near it so I wonder what it will be supporting. 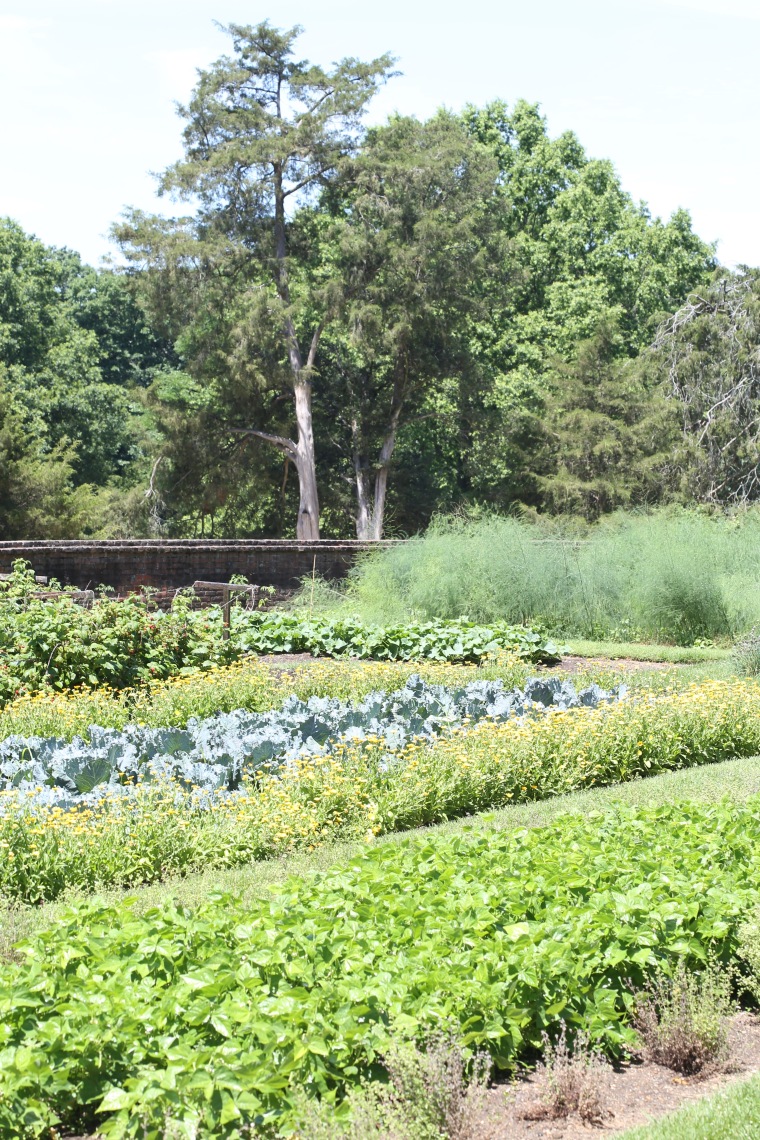 The high walls surrounding the garden created a micro climate that helped keep the temperatures up to give the plants an early start in spring.

Have you ever heard of cabbage envy?  No?  Well, you have now.  Down by the river, there is another small garden area near the 16 sided barn.  We literally stood there and stared at the cabbages.  Someday, when I grow up, I’m gonna grow cabbages like these… 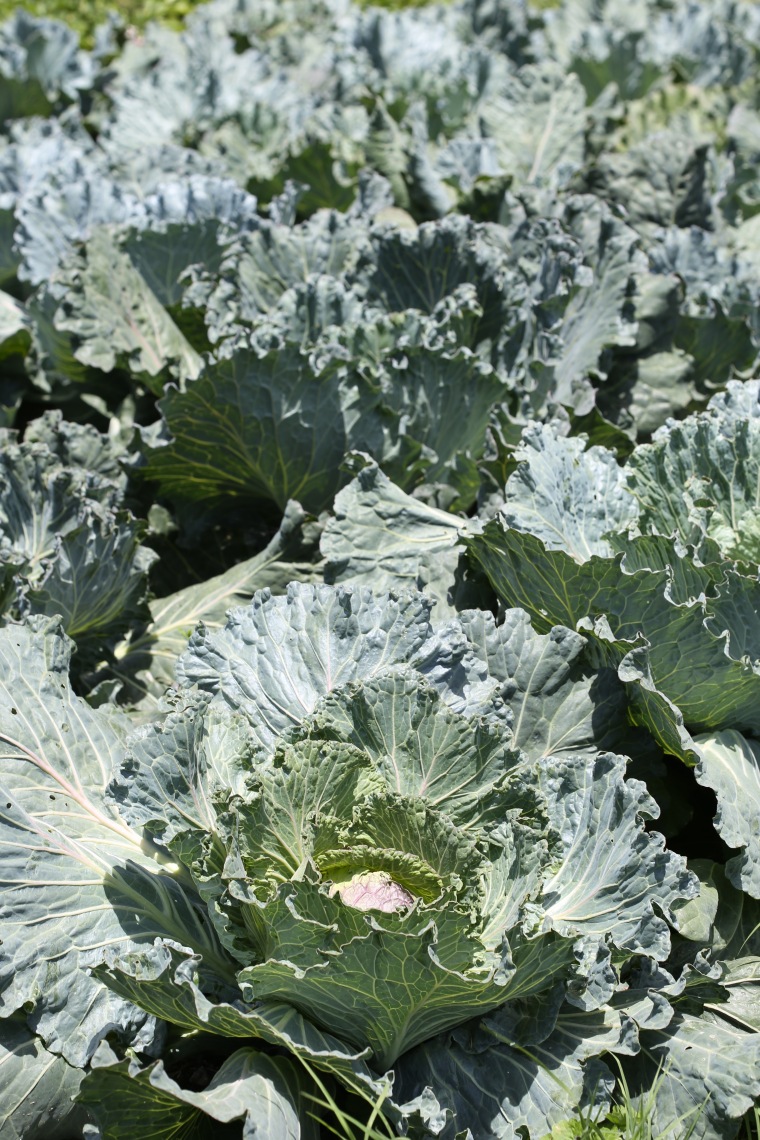 And not a cabbage worm in sight.  Then we stood there and wondered what chemicals they were using on them to keep the caterpillars at bay…

These onions were at in bloom and they must have been near 5 feet tall and as big as a softball.  Again, some day…

As we ponder the possibilities of fencing for our own garden, I admired this one because of its simple construction.  Then I remembered that I do not live in a forest and my husband is not a lumberjack; this might not be our solution.

The 16 sided barn sits on a small slope and was interesting to see.  On weekends, they must have livestock here, but not on our trip.

This house is a recreation of a cabin that belonged to one of the more prominent slaves and his family. 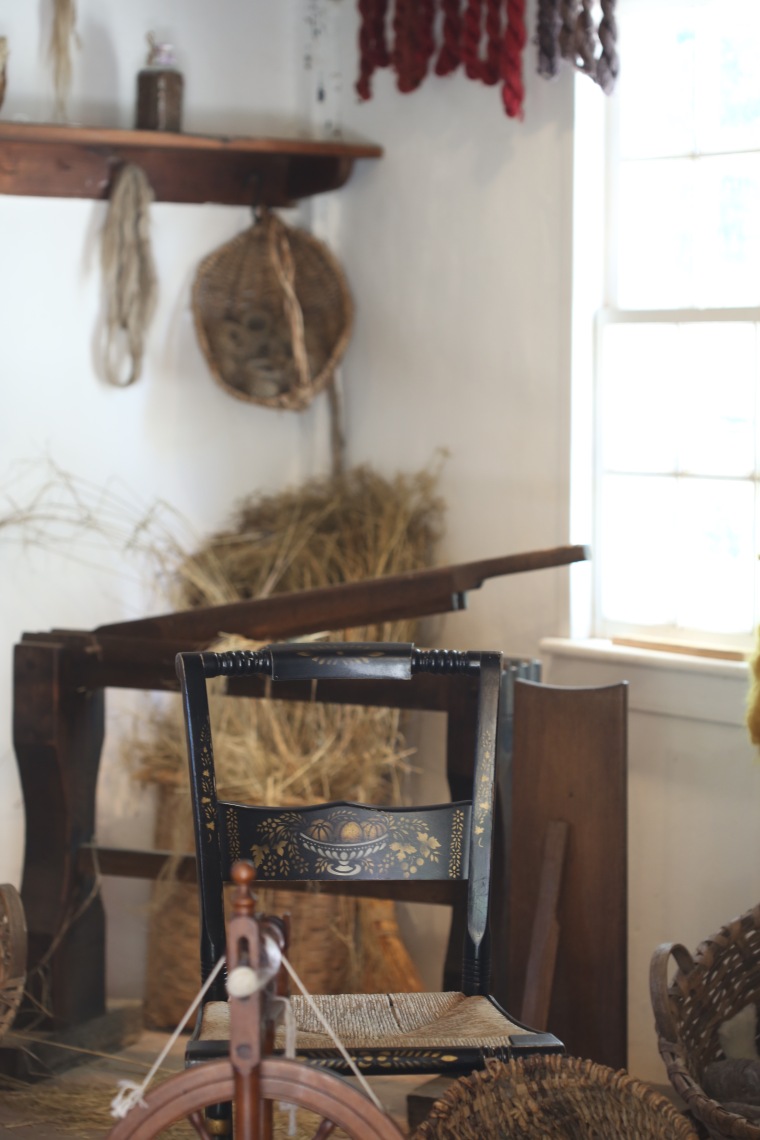 Just out of view from the mansion is a row of buildings.  Many had a specific purpose; salt house, smokehouse and so on.  This was the knitter/weaver house and as a knitter, I had to stop in and take a few photos.  George Washington led a very ordered life.  His primary goal was to be as self-sufficient as possible and while he had the advantage of wealth, the slaves working on his estate were able to produce most of what they needed.  The things produced here would most likely have been used on the property.

The wool would have come from livestock on the estate and it would have been processed by slaves who would have also used it for weaving and knitting.

Along side the weaving house was a small plot that was called the botanical garden.  In this small space, Mr. Washington would experiment with new varieties of seeds and plants.  If they were successful, they would have been added to one of the gardens or groves to produce food. 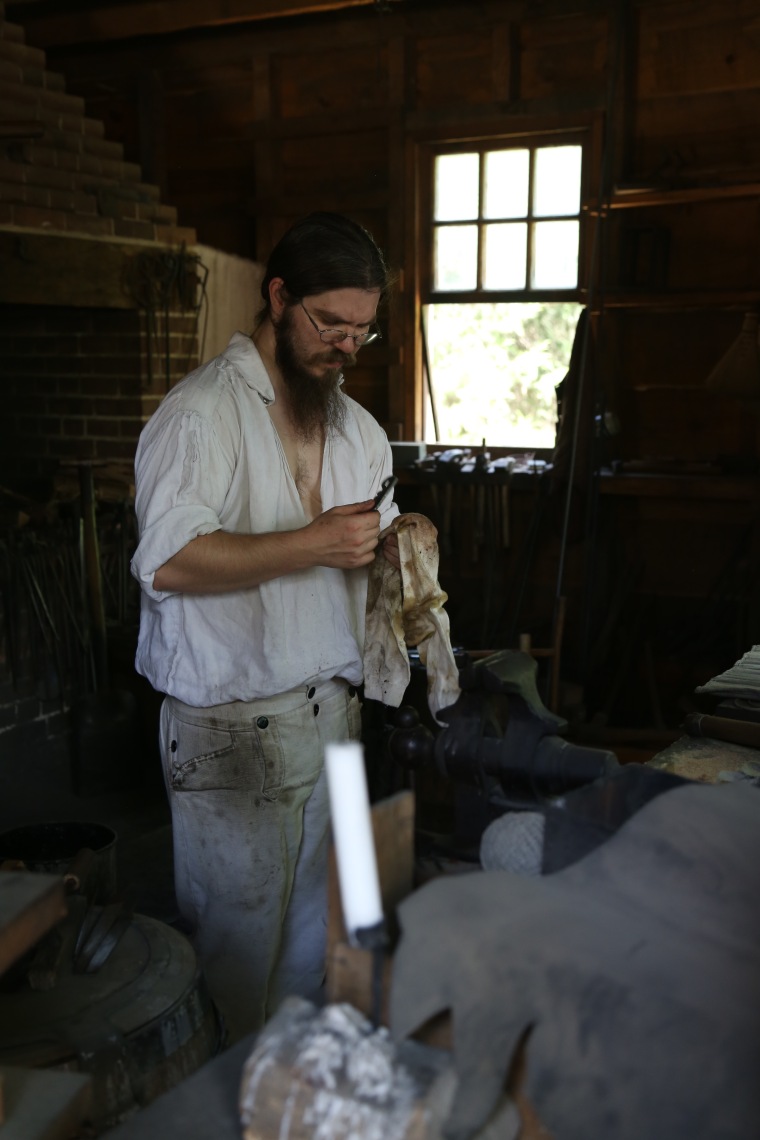 There is a recreated blacksmith shop along the path as well.  In this shop, tools are produced using the same methods that were employed over 200 years ago.  Most of the tools they make now get used around the estate. 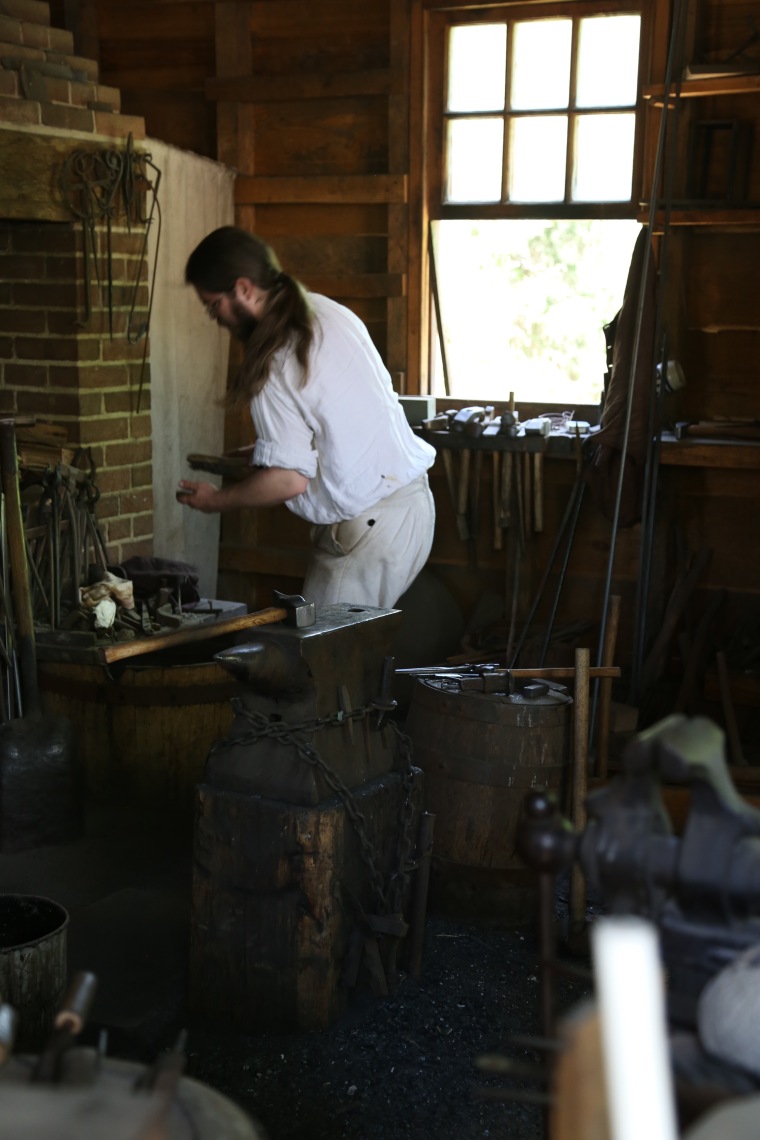 As we looked on, this gentleman was working on a project.  They may have a lot of stuff in there for visual impact but this really is a working blacksmith shop and he went back and forth between the table/anvil and the fire as he worked on the piece in his hand.

There were horses present back then but there wasn’t a farrier to produce shoes for them.  Because Mr. Washington was not one to spend money unnecessarily, he made sure that a few of the blacksmiths were properly trained to produce shoes and tend to a horse’s feet. 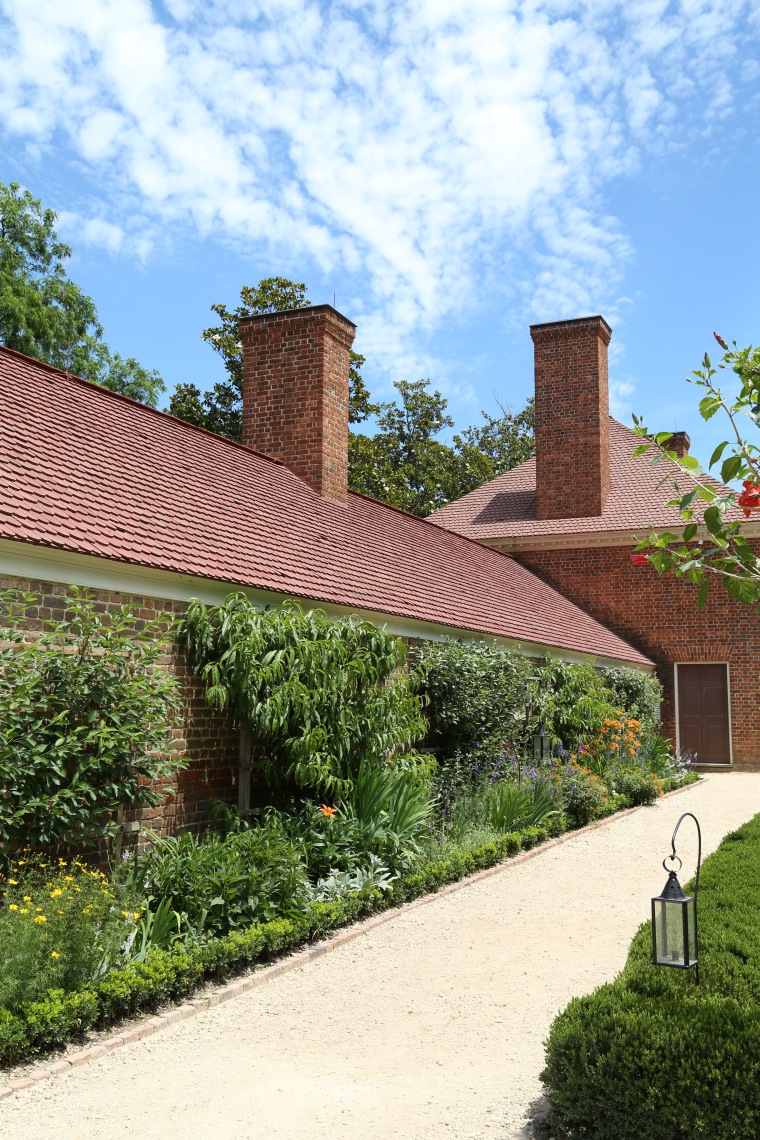 One of the most interesting parts of our Gardens and Groves tour was the greenhouse.  While we were not permitted inside, it was interesting to know that back then, they would grow citrus trees and other tropical plants in the greenhouse during winter and move them outside in summer.  There was a room in the back of the building where a fire was tended around the clock to keep it warm for the plants.  The men in charge of keeping the fire lit would sleep in that room . 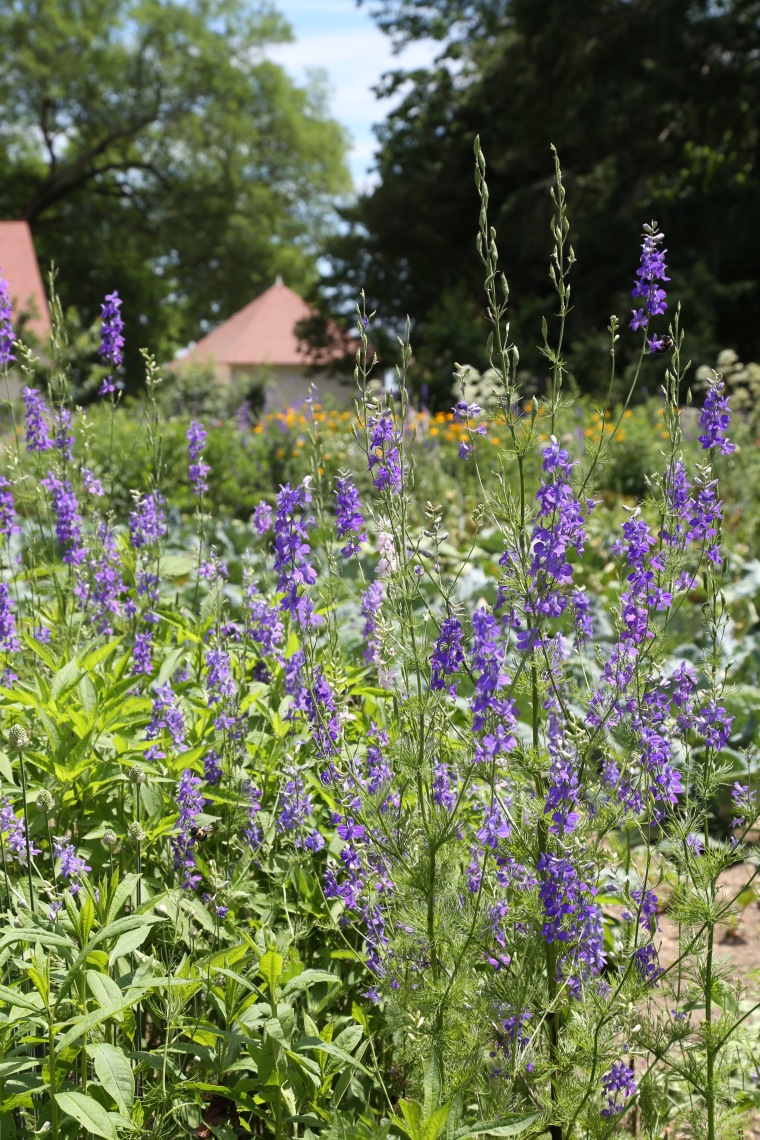 The larkspur is one plant that they know was growing on the property when Mr. Washington lived there.  They actually sell packages of seeds and when my mother in law visited here last year, she brought me one.  So far, I haven’t had any luck getting them to germinate but I will try again this fall.

After seeing these poppies, I have a new admiration for them!  Beautiful when in bloom and then come the seed pods, which I think are just as pretty as the flowers. 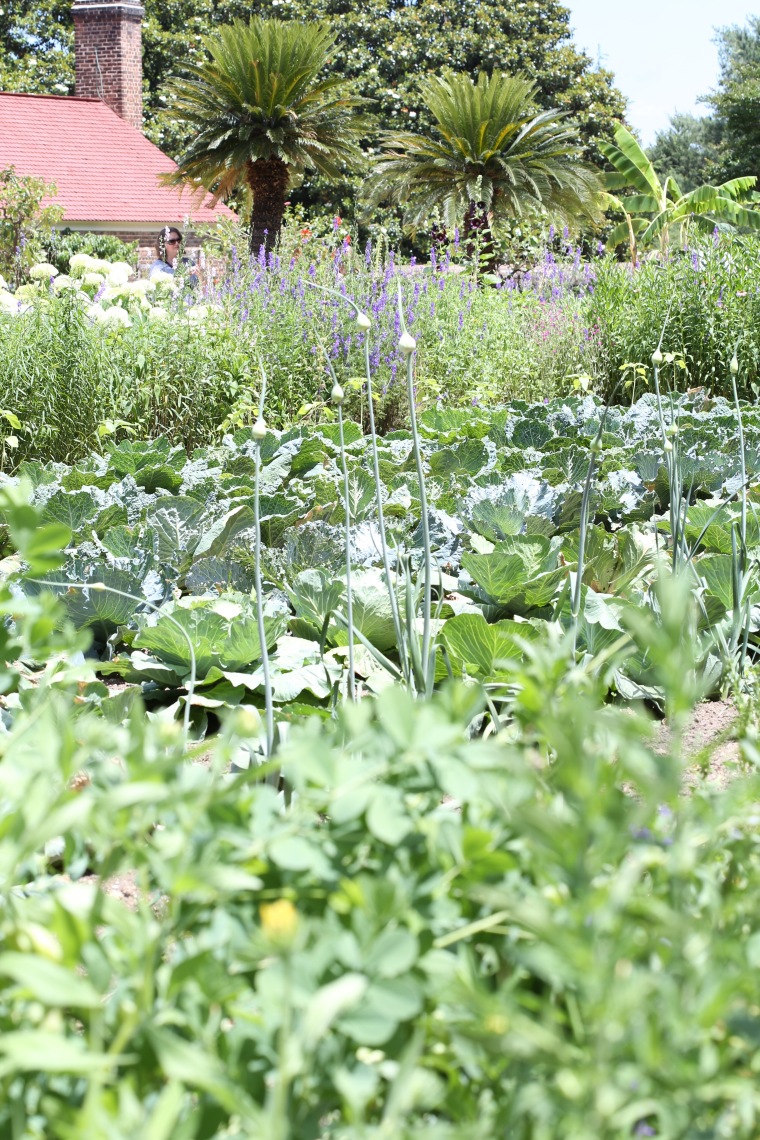 In the upper garden, flowers are everywhere but if you look closely, there is a vegetable garden hidden in there too!

We toured the mansion (a quickly guided walk through with little time to stop and truly take it all in-and no photos allowed), walked the grounds, saw the tomb and trees that George Washington himself planted (two tulip poplars and a hemlock-absolutely huge) and then wandered through the museum.  The museum is a trip in itself, honestly.  There are several videos to watch and plenty of historical displays with lots of text to read.  He was such a fascinating man and it was a bit overwhelming after all the walking in full sun for two hours on the grounds.  Then we arrived at the end of the tour and the final display; his teeth.

Mr. Washington did not wear wooden teeth.  He also did not neglect his teeth, actually, he did what he could to save them and actually visited the dentist!  Back then, when teeth would fall out, they would use wire to hold in replacements.  When he was inaugurated for  his second term, he only had one single tooth left and made the decision to have it pulled and just use dentures.  Those dentures now rest in a glass case for all the world to see.  They consist of a mixture of human and cow teeth and they are set into hinged, metal plates and they look unbelievably uncomfortable-it is no wonder he was not smiling in his portrait!

Bottom line, go if you can!  Buy your tickets in advance and go in the middle of the week before school lets out for the year to avoid the crowds.  And one other suggestion, if you want to see all three floors of the mansion, visit in January or February.  The number of visitors is so small then that they open the third floor up to the public; currently, the crowds are too large and the structure is not stable enough to withstand the traffic.