Skip to content
it was date night-imagine that. darry and i gathered ourselves together and headed out to one of our favorite haunts, just the two of us. and where did we go you ask, why the grocery store of course. it has been a little joke between us for quite some time that the only time we could go out, just the two of us, was when we needed groceries. but there we were wandering through the produce section in search of who knows what; and search we did until we found it. what it is, i am not quite sure. the sticker claimed they were angel food cakes and we were both standing there gawking and pointing and wondering why would somebody do this to a cake…

candidates for cakewrecks-truly hideous and yet, something occurred to me. i could do something different to the angel food cake that i was testing. 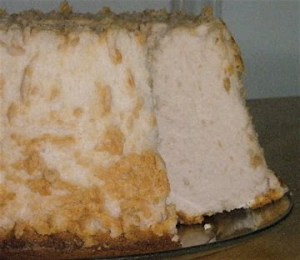 i had some cherry juice and i reduced it by simmering it. after it cooled, i added it to the batter and the result was a soft pink color and a hint of cherry flavor. best part, no airbrush system was needed. 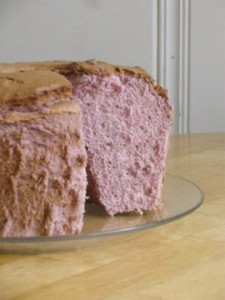 while rummaging, i found some blackberries that had been living in the freezer. i juiced them, reduced the juice and voila-lavender cake! 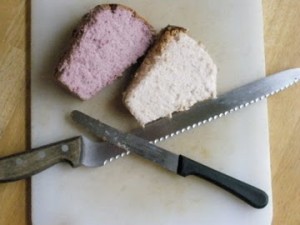 trial and error led me to the conclusion that the cheap steak knife cut the cake better than the expensive serrated blade.
all this talk of rainbow cakes left me thinking of the angel food cake that appeared every so often during my childhood. my mother was not the type to bake a cake unless it was a mix. she would make angel food cakes and she always had a trick up her sleeve…

no mix for me, egg whites whipping with the sugar spilling in ever so slowly 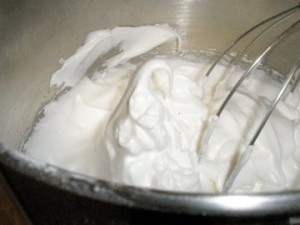 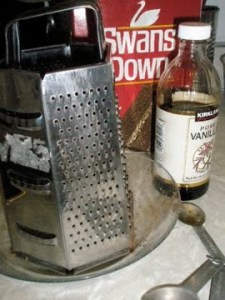 that trick i mentioned, it was grated unsweetened chocolate. mom is not a big chocolate fan but she does like it in angel food cakes 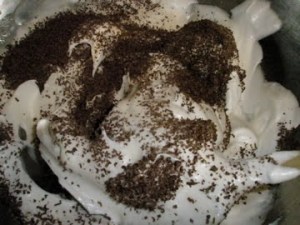 gently fold in the flakes of chocolate 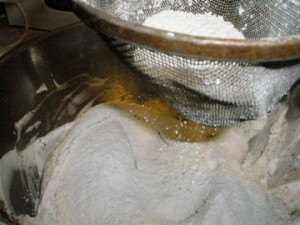 into the pan it goes

i use two timers when i test recipes. one to count down the anticipated time and one to count up the total time it takes

the best way to loosen the cake from the pan-a skewer. run it around the cake to loosen it.