i have been craving cinnamon raisin bread. there, i said it and i am not sorry that i did. so what you say. well what this means is that i can now satisfy my craving all in the name of bread baking day since this month’s theme is sweet breads. maybe it’s just a childhood comfort food thing, i don’t know and i don’t care. toasted cinnamon raisin bread with a thin brushing of butter…what more could anyone possibly need?

this has been cinnamon week at my house. knowing that this challenge was due, i made my loaf of cinnamon raisin bread and saved the extra cinnamon filling from the swirl. when it was time to make the sukkar bi tahin for the bread baking buddies challenge, i pulled out the extra filling and substituted it for the tahini filling. the scent of warm bread and cinnamon has been wafting through the house for days and i will be lucky if i can fit through the doors. i guess the cinnamon rolls i brought home from work (where i made them from scratch) really won’t help here. honestly, how can anyone resist soft and tender bread with cinnamon and butter and raisins and let’s not forget that it is warm and fresh… 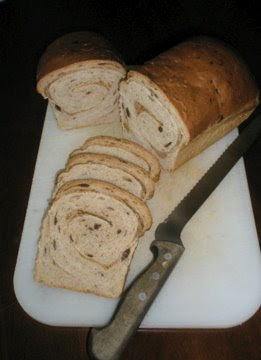 my cinnamon raisin swirl bread. sliced and ready for the toaster. has anyone seen the butter dish…
please be sure to check out the round up and all of the entries on the website hefe und mere and my sincere thanks to stefanie for indulging my cravings.