Skip to content
it surprises people to learn that i have a daughter in college. why, i am not sure, i am not exactly fresh out of school myself and on close examination, it is getting tougher and tougher to pass for less than 40…today is alix’s 20th birthday, it is also my father’s birthday. that was one year that i didn’t have to worry about sending him a gift, it doesn’t get much better than a first grandchild as a birthday gift. we celebrated this years day a day early since alix is busy with school and she asked darry to make her stuffed peppers and for me to make a cake. since i wanted to take part in the bread baking buddies challenge of steamed buns, i made those too.
the recipe for the xiang cong hya juan bao or chinese flower steamed buns called for chinese flour. how vague…first up, we headed to our favorite and closest asian market, K&S World Market. 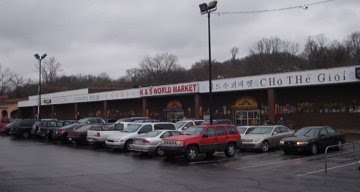 when ever a recipe calls for asian ingredients, we start here. as for asian flour, we had many to choose from and if only we could read in japanese, chinese, korean or any number of asian languages.

after looking at many bags of flours, we settled on this one. it is indeed chinese and as you can see, it is even recommended for buns. what makes it so special is a mystery since most of the information is in chinese. i can say this though, it is very white which suggests bleaching and that will help with tenderness and it is very fine and silky another indication that this is a low gluten flour. 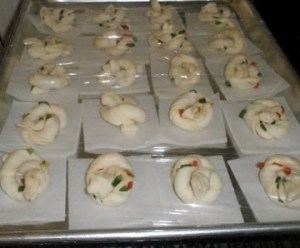 i did my best to follow the recipe, no extra water was used and i gave my rolling pin a good beating with this dough. the chives came from the garden and so did the peppers. we had a bunch of mild banana peppers that had turned a deep red color.

since i was skeptical that the buns would be any good, i also made a batch of steamed buns using a recipe from the old classic cookbook, the key to chinese cooking by irene kuo. i have always wanted to make steamed buns and thought this might be a good time to try them. i made a filling with chicken, andouille sausage, greens from the garden, peppers and traditional asian seasonings found in most steamed buns. the dough is a little different than the flower buns, it has more leaveners and is kneaded rather than rolled to develop the gluten.

we had picked up a bamboo steamer just to make the buns. this was the first attempt at steaming the buns. sorry to say they didn’t turn out very good. they needed to proof longer and steam longer too. the second batch was better but honestly, a little bland. my husband, mr. condiment, suggested a dipping sauce and that helped with the lack of flavor. 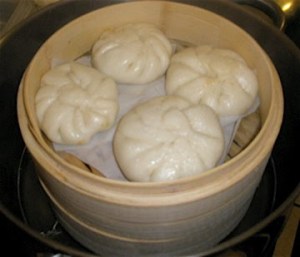 here are my chicken & sausage buns in the steamer

honestly, these were better than the flower buns. with everything in the filling and the sauce, we ate more of these. it was a fun challenge and i look forward to making this type of dish again. since i have about 4 pounds of flour left, i will definitely do something with them. the key to success, longer proofing and longer steaming at a lower boil.

my thanks to karen for a truly challenging recipe and for helping me to provide birthday party entertainment!