Skip to content
the saying goes like this: if you can’t stand the heat, stay out of the kitchen… well, i was in the kitchen cooling off, yes cooling off because it was hotter than hell outside and for some strange reason, actually cooler in the kitchen-go figure. karen likes to shoot with natural light and that had us working outside a bit. we were up in the barn using the porch to stage the shots. we also spent a fair amount of time chasing a pesky grackle (black bird) from the area. he (or she) was determined to have dessert. a few times, he succeeded so it was a good thing that everything hit the bin after we were done with it. even if he didn’t get it it was destined for the trash because the heat just killed everything after a while.

blackberry cobbler with cinnamon swirl biscuits. another one shot under the lovely lights in the kitchen.
so just what does it take to produce photos for a cookbook? besides the food, lots of stuff. plates, cups, bowls, glasses, linens and so much more. kitchen equipment, fixtures and other things to make it look authentic. let’s not forget surfaces and backgrounds too. 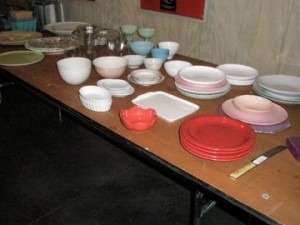 just some of the props; plates, cups & glasses, bowls and more.

and more of the same

lots of silver ware and serving utensils too
but when it is all put together, you can take something as ordinary as an apple crisp and make it look like the best thing ever.

karen staged and shot this and when she was finished, i took a shot with my camera. trust me on this, her shot was a thousand times better than mine. i really did not make an effort to get the same shot as she did-i want her to get all the credit she deserves and i just wanted a shot for the blog.
so after working more than 45 hours in three days, i still have 3 days to go. first, i will spend my only day off baking stuff in the hope of getting ahead for monday-wish me luck!