this has by far been the longest two weeks of my life!  never in my wildest dreams would i have thought that i could miss having my oven.  when the heating element in my oven burned out, my first thought was that it was time for a new oven.  we had already spent a lot of money to have the burners repaired/rewired due to the excessive workouts our cheap electric range gets.  the visions of a new range, a gas range, a gas range with a convection oven…pick one, they all danced around my head like sugar plums at christmas.  then was the realization that i would need to hire a plumber to run the gas lines, buy a not so cheap range and i’m sure i don’t need to explain.  we then thought about just replacing the electric box with another and still, it was more than we wanted to spend right now.  after a quick internet search for elements and youtube how to videos, we went the cheapest route and ordered parts.

the parts arrived and my husband set about installing the new element.  it all went well and i am back in the business of baking.  with the oven out of action for two weeks, i had to use up a big bag of potatoes in a hurry.  normally, i cut the potatoes into wedges, toss them in olive oil and seasoned salt and then bake up oven fries.  but for some reason, i wanted to make a more substantial dish with them-a pommes anna or a gratin/scalloped potato dish and since my in house repair man has a thing for knishes, a knish pie was the solution to my abundance of potatoes.  the nice thing about this dish, it doesn’t really require a recipe.  it can be made in any size dish and with any kind of potatoes. 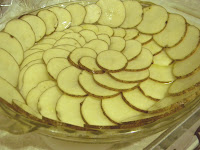 while my potatoes for the filling boiled, i used my mandoline to slice some potatoes into thin rounds.  they were layered into a greased glass pie dish and brushed with some olive oil.

the boiled potatoes were mashed and mixed with caramelized onions and garlic, seasoned with salt and pepper and combined with some freshly grated asiago cheese.  this was carefully packed into the “crust”. 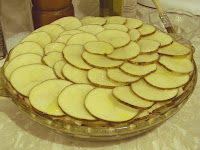 a final layer of potatoes was arranged over the filling and also was brushed with some olive oil.  into the oven it went! 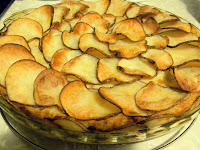 an hour and 15 minutes at 400 and my pie was ready.  this pie is so versatile.  the filling could be made with any potatoes you like-how about purple potatoes?  mix in some parsnips or other root vegetables or maybe some of your favorite herbs.  want a vegan dish-leave out the cheese or for you meat lovers, add some crumbled bacon, chives and cheddar for a loaded potato pie. 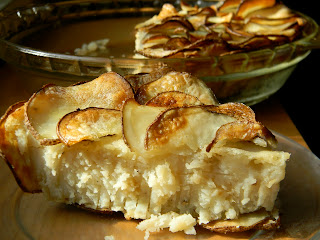 potato crust
6 medium baking potatoes
1/4 cup olive oil
wash the potatoes and using a mandolin or similar slicer, slice the potatoes no thicker than 1/16″ thick.  grease the pie dish and layer the slices in the bottom and up the sides of the dish.  brush carefully with the olive oil using a soft bristle brush.  save the remaining slices to decorate the top of the pie.

knish filling
6 cups diced potatoes
2-3 tablespoons olive oil
1 1/2 cups 1/4″diced onions
3 cloves garlic, minced
1/2 cup finely shredded asiago cheese
salt and pepper to taste
preheat the oven to 400.  place the potatoes in a pot, cover them with water and gently boil until soft.  heat the olive oil in a skillet and saute the onions until translucent-3-4 minutes.  add the garlic and continue to saute until a golden brown color, stir frequently to prevent burning.  drain the potatoes and using a ricer or a food mill (if you have one, otherwise just use what you have) mash the potatoes to remove the lumps.  add the onions/garlic and cheese and mix well.  season them to taste with the salt and pepper.  when finished, carefully fill the crust with the mashed potatoes and smooth it out.  use the remaining sliced potatoes to cover the top of the pie.  bake the pie until the potatoes are a nice golden brown, about 1 hour and 15 minutes for a 9″ dish.  cut into wedges to serve.

this dish can be served with gravy of any kind if you have to eat your mashers with gravy.  a dollop of sour cream may also be a good garnish.  for those knish fans out there, you know that nothing else is necessary!

and as always, make one, send me the photo and see it here!  bakinbabe116@aol.com