like many of you foodies out there, i also look at many other websites and blogs dedicated to food.  in a recent post on food52, i saw an invitation to members of the website to test tart recipes that they are featuring in an editors pick challenge.  since i knew i would be making a pie this week, i quickly committed myself to testing the s’more tart on the list.  little did i know that it was a parve tart.  for those of you who do not know what this means, it is a jewish dietary law that does not allow the mixing of meat and dairy.  anyone who has come from a home with a kosher kitchen understands this-i did not but have had enough exposure to it to know that this was going to be interesting.  how can you make marshmallows without egg whites?  since i have promised an original recipe each week, i am including the link to the recipe from the food52 as well as my nonparve interpretation. 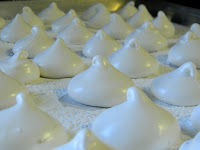 no homemade s’more tart is complete without homemade marshmallows.  i made a small batch using a recipe i found on an interesting website called cooking for engineers.  the recipe is a good reference for someone who has never tackled the task of making fresh marshmallows-like me.  the only suggestion i have to the recipe is to cut the vanilla extract in half.  for my pie, i piped them out into little kisses so that i could arrange them on the top of the pie.  they came out nice with a good texture.  they were a little sticky but i will attribute that to the fact that i did not make them into a slab dusted with cornstarch as suggested in the recipe.
now, for the parve version.  if you follow the link above, you will find yourself looking at a recipe that just might be missing something-especially if you are not familiar with the term parve or the practice of eating a kosher diet.  the recipe is mainly water, sugar and gelatin.   while it looks improbable that the two steps could combine to form a marshmallow like topping, they do and for what it’s worth, it’s pretty close in flavor and texture to the commercially produced stuff available.  keep in mind that most of them are not made with egg whites either-just lots of sugar and gelatin. 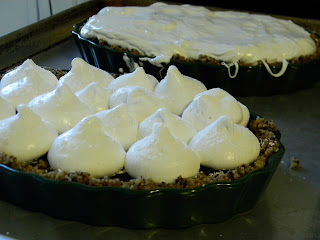 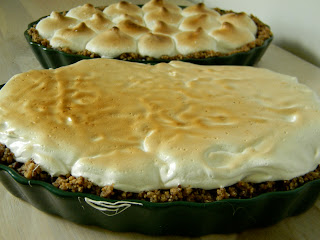 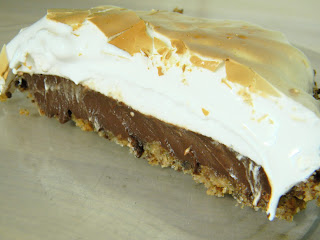 the parve version was made with cookie crumbs (should be non dairy/egg cookies like graham crackers to be truly parve-i did not have any so i pretended) as well as sugar and margarine.  the chocolate ganache filling was a combination of bittersweet chocolate and coconut milk.  it worked out well but it was a little firmer than i prefer for a ganache.  the topping formed a crispy crust under the broiler and was very sticky to cut through-must use a wet knife to do so.  all in all, the flavor was good and the topping was surprisingly like a marshmallow.  would i make this again-not sure.  honestly, we do not have the need to follow a parve diet and since none of us suffer from food allergies to dairy or egg whites(albumen), it is not likely that i would do this.  however, it is nice to know that this can be done just as easily as the non parve version and i am glad to have had the chance to try it out.  at the end of the day, i learned a new technique and that in itself made it worth the effort. 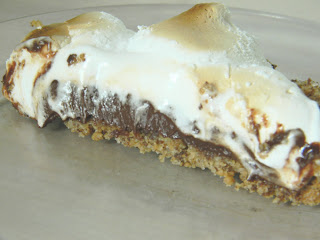 adapted from shoshana of couldn’t be parve and michael chu of cooking for engineers
1 (9″) tart serving 8
1 1/2 cups cookie crumbs-i used a combination of non-dipped biscotti pieces
1/3 cup sugar
6 tablespoons butter, unsalted and melted
9 ounces bittersweet chocolate
1/2 cup coconut milk
1/2 cup heavy cream
1 tablespoon unflavored gelatin, about 1 package
2 1/2 tablespoons water
2/3 cup sugar
3 tablespoons corn syrup
2 tablespoons water
pinch of salt
1/2 teaspoon vanilla
in a mixing bowl, combine the cookie crumbs with the 1/3 cup sugar.  add the melted butter and mix well.  press it into a tart pan with a removable bottom.  it is possible to bake this crust to make it crispy but i skipped that step.   heat the coconut milk and heavy cream until it is almost simmering.  place the chocolate in a heat proof bowl, pour the milk/cream over it and let it sit for 5 minutes.  stir until smooth and then scrape it into the tart shell.  place in the fridge to set while you prepare the marshmallows.
pour the water into a small bowl and sprinkle the gelatin over it.  set aside and proceed with the recipe.  place the sugar, corn syrup, salt and water into a small sauce pan.  bring to a boil, washing down the sides of the pot if necessary and cook to 248 on a thermometer.  remove from the heat, add the gelatin and stir until smooth.  pour into the bowl of a stand mixer and with the whip, whip until fluffy and no longer hot.  add the vanilla and mix well.  using a piping bag, pipe little mounds onto a pan that has been dusted with cornstarch.  let the marshmallows set and when they are no longer soft and sticky, arrange them on top of the tart.  using the broiler or a torch, carefully toast the marshmallows.  use a wet knife to cut the tart.