Skip to content
while it might seem that i have given up on this challenge-believe me, i haven’t.  our younger daughter graduated from high school and with that occasion came all kinds of fan fare and family.  for the last two weeks, i have managed to make all of my pies but have not had the time to sit down and share them.
when younger, much younger, my husband and i thought it would be exciting to move around the country.  we worked in restaurants which made finding jobs easy.  it also meant leaving behind friends and family.  we had reached a crossroad of sorts 16 years ago when my uncle was killed by a reckless driver.  we made the decision to move closer to my family on the east coast.  despite our good intentions, we didn’t quite make it and now find ourselves still missing out on the chance to see them.  time flies, we often go a year or more between visits and in that time, our girls have grown up.  to have the chance to spend some time with my mom was great and the chance to share some pies with her was fun too.
so first up is the snickers pie.  anything that has chocolate, caramel and candied peanuts works for me and most of the family too. in an effort to save time, i used a recipe i found online and made subtle changes to adapt it to pie size rather than a small square baking pan.
a few notes to start with:  the crust was really greasy when i prebaked it.  actually, there was a lot of fat in the recipe in relation  to the amount of flour and i cannot help but think that there is a typo in it.  if you choose to follow the recipe, consider using a different crust.   while i could have just used the dulce de leche called for in the original recipe, i chose to caramelize sweetened condensed milk since i had a small collection of cans in the closet.
snickers pie 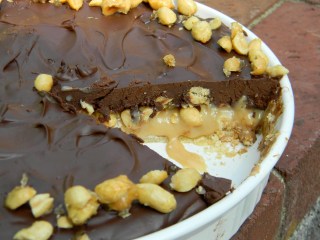 adapted from dorie greenspan by way of the naptime chef
1 (10″) pie serving 10-12
caramel filling
2 (14oz) cans of sweetened condensed milk
preheat the oven to 350.  place the milk into a covered casserole dish and place the dish into a larger pan.  pour in enough hot water  to reach the same level as the milk.  place the pans in the oven and bake until a deep golden brown (darker than the photo above-i wasnt happy with the consistency).  it will take as long as 2 hours and you will need to stir it and whisk it every 20 minutes to gain an even tone.  while this bakes, make and bake the crust, recipe follows.  pour the caramel into the prepared crust, press a piece of plastic wrap to the surface andchill it completely-at least several hours or overnight.
crust
1 cup all purpose flour
1/4 cup sugar
2 tablespoons powdered sugar
1/4 teaspoon salt
8 tablespoons unsalted butter, cold and cut into small cubes
1 egg yolk
preheat the oven to 350.  place the flour, sugars and salt into the bowl of a food processor and pulse to combine.  add the cubed butter and pulse a few times to cut in the butter but only until the mixture resembles coarse meal.  add the yolk and pulse to combine and forms a ball of dough.  press this dough into the bottom of a 10″ pie dish which has been lightly greased.  prick the crust all over with a fork and prebake it until it just starts to color, about 20 minutes. allow it to cool completely before assembling.
topping
2/3 cup sugar
1/3 cup water
2 cups salted peanuts
10 ounces semisweet chocolate
2/3 cup half and half
combine the sugar and water in a saute pan and cook over medium heat until it boils  and the sugar melts.  continue to cook until it starts to color but be sure that you do not stir it.  add the peanuts and stir to coat them with the sugar.  turn them out of the pan onto a greased baking sheet and allow them to cool completely.
in a microwave safe bowl, melt the chocolate and half and half on the lowest setting until it is melted and smooth.  using 15-20 second intervals on low power, be sure to remove the bowl and whisk in between heating cycles to prevent scorching.
assembly
chop the peanuts coarsely and sprinkle 3/4 of them evenly over the top of the caramel while reserving the remainder for garnish.  drizzle the chocolate glaze over the peanuts and smooth it out evenly.  allow it to set in the fridge for at least 30 minutes.  decorate the pie with the remaining peanuts.
so there you have it, one down and two more to go before i make this weeks pie!!!  make one and send me a photo, you will see it here!!!  bakinbabe116@aol.com