it’s been a month, exactly one month today, that my house was broken into and my computer was stolen.  what a month it has been!  my media tour is moving along and i have replaced my computer-added a security system to the house also since just replacing the doors a second time seemed useless.  let’s hope it makes a difference.  time has flown and things have blurred a bit so imagine my surprise when i realized that i had missed more than half of mary, the food librarians annual bundt fest!!!   i just had to fix that and send some bundt love her way and i couldn’t think of anything better than a little zebra action.  but for those of you who know me, you know that i wouldn’t be happy with just two colors, no, after the month i had, i needed the whole damn rainbow!!!!!!!  get ready mary, here comes the rainbow bundt… 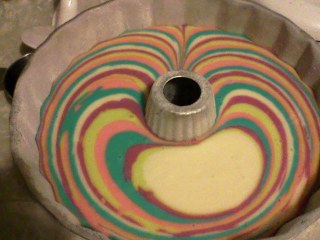 after mixing the batter, i separated it into 5 equal parts.  then i added color to 4 of the portions and left one plain.  all i had to use was a package of mc cormicks neon egg colors which consisted of pink, purple, blue and green.  each color mixed in differently and they each needed different amounts to get the color saturation just right.  to get the stripes, you carefully pour in spoonfuls of each color batter to the same spot in the pan to make rings.  the rings spread out and fill the pan and if you use a bundt pan like i did, it looks really amazing.

now, how cool is that?  the stuff that dreams are made of if you ask me.   okay, i admit it, the stress is getting to me-obviously, neon colored cakes are all it takes to amaze me…

a few notes before we get started.  first, i increased the recipe by half to fill the bundt pan, after all, mary is having a bundt fest.  second, i omitted the cocoa powder in the recipe since i wanted a rainbow cake.

6 eggs
1 1/2 cup sugar
1 tablespoon vanilla
1/2 teaspoon salt
1 1/2 cup canola oil
3 cups all purpose flour
1 tablespoon baking powder
1 1/2 cups milk
liquid food colors, as many as you like
preheat the oven to 350.  grease and flour a 12 cup bundt pan.  place the eggs, sugar, vanilla and salt into a large mixing bowl and on medium, whip until it thickens-about 10 minutes.  slowly pour the oil in taking care not to hit the beaters or you will wear it and so will your kitchen.  if you are using a hand held mixer, put it away now, and if you are using a stand mixer, remove the bowl from the machine and pour the batter into a large but shallow bowl.  sift the flour and baking powder over the egg mixture and carefully fold it into the batter.  fold the milk in last-if you have followed this order, you should not have any lumps.  if you have lumps, run the batter through a mesh strainer to break up the lumps and smooth out the batter.  divide the batter into 5 bowls (1 1/2 cups each) and tint as desired.  using a serving spoon, carefully pour spoonfuls of each color into the same spot in the pan to create a bullseye pattern that spreads and fills the pan.  bake until a tester inserted comes out clean, about an hour to an hour and 10 minutes.  allow the cake to cool in the pan for 15 minutes and then carefully turn it out onto a rack to cool completely. 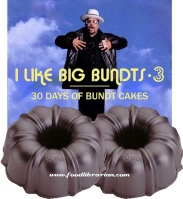 be sure to check out mary’s month long bundt fest-i love big bundts 3 and do bake one with her!

oh, one more thing.  before you start wondering about my photos, and whether i have lost my mind, my camera was also stolen.  those photos were taken with my not so smart phone (no iPhone or droid for me).