Skip to content
in 2011, my daughter packed up and moved to atlanta.  i am pretty sure the ink wasn’t even dry on her college diploma.  there was no stopping her-not even the offer to live at home for a few months, rent free, to build a little nest egg.  nope, she was gone just as quickly as the party trash was hauled to the curb.  a year and a half later, she is still there, living the dream…the good part, i now have a place to stay when i want to go shopping at ikea.
better still, atlanta has an incredible ethnic diversity that nashville doesn’t.  now before you think i am wrong, keep in mind, i live off of nolensville road-it doesn’t get much more ethnic in nashville than it does around here.  we have almost as many kurdish neighbors as we do american neighbors.  there are more middle eastern and latino grocery stores here than traditional american ones.  but even so, we do not have the selection that i find in atlanta.  a drive along the buford highway will make nolensville road seem as exciting as a loaf of sandwich bread.
every trip i make to atlanta, i head straight for the buford highway and all of the korean supermarkets.  a favorite stop is h-mart.  this last time, we didn’t shop for much but we did have lunch at one of the restaurants in the front of the store.  it was almost fast food like in appearance but then we had to wait for our lunch to cook. 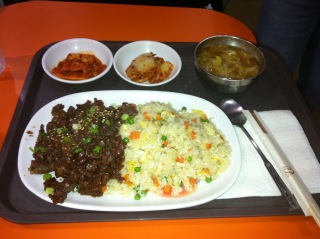 my bulgogi lunch plate came with soup, two kinds of kimchi and a ton of fried rice.  it was almost as good as a traditional barbecue restaurant-the only thing missing was the grill in the middle of the table.

the kid had a bowl of soup.  it came to the table at a full boil!
another place i must visit every time, white windmill bakery.  whether it is the full bakery cafe on buford highway or a trip over to megagarket to the in store bakery, i simply cannot come home without stopping there.  they sell the most amazing pastries and cakes and believe it or not, the breads are out of this world.  i love the large, fluffy loaves of cream bread and multi grain bread.  when sliced, only half will fit in a toaster; you have to cut the slices in half to toast them. 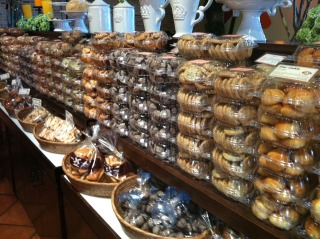 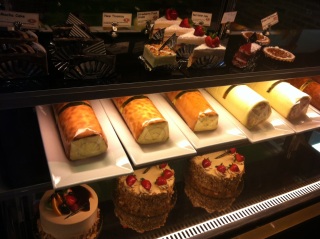 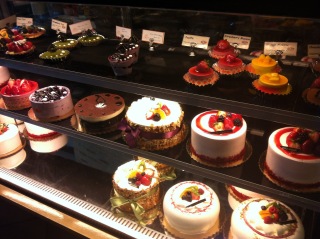 next trip, i am having nothing but cake-a slice out of as many as i can from that showcase!!!