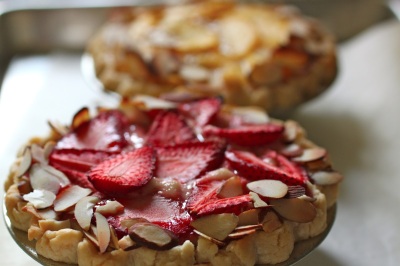 what’s in a name?  when it comes to a menu or a recipe title, everything.  the title “baked yogurt tart” just does nothing for me.  a picture would help sell it but the publisher must have decided not to include one, too bad, it might have helped.  might being the key word.
so shy would i bother to make one?  curiosity and a husband who never fails to ask me, “what’s for dessert?” after every dinner we have together.  the catch, neither one of us eats much dairy.  sure a splash of half and half in coffee or a little butter on toast, maybe the occasional slice of cheese but a slice of a yogurt filled tart?  not likely.  while i tolerate it better than my husband can (physically-as in gastrointestinal abilities), i still prefer to avoid it since i generally feel better if i do.  the only way i could make this would be to use a soy or coconut yogurt.  honestly, neither one is something i eat much of just because of the long list of stuff they add to it to give it a texture similar to real dairy yogurt.  but since i want to bake along with the tuesdays with dorie followers and i know my husband will ask that burning question, i baked the tart.
the recipe is easy to follow.  it calls for 1/4 of the pie dough recipe.  i cheated.  i had two prebaked mini pie shells in the freezer; i thawed them for the recipe.  to make the filling, i mixed up 1/3 of the recipe which resulted in the perfect amount for 2 little pies.  for the fruit, i topped one with peach slices and the other with strawberry slices.  the baking time had to be reduced to 25-30 minutes and they came out of the oven a tiny bit jiggly in the center.  they set up just fine.  the only criticism, they look rather dry and a little leathery on top.  i may have to brush a little warm honey over them before serving.
to see the full recipe, check out this great website from a la carte communications.  and as always, to see the what the other bakers came up with, be sure to visit the tuesdays with dorie page. 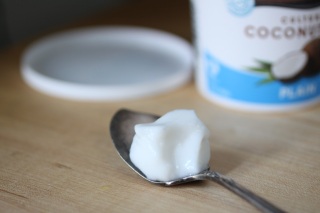 coconut yogurt looks a lot like regular low-fat yogurt.  it has a lot of vegetable stabilizers in it to accomplish that so it is hardly an unprocessed food.  the taste was more vanilla than coconut but even more surprising was just how sweet it was since it was labelled “plain.”

i love that the recipe was so easy to divide.  i just needed one egg. 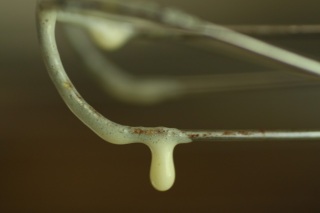 yeah, it was a lazy day in my kitchen; the hand mixer came out for this recipe. 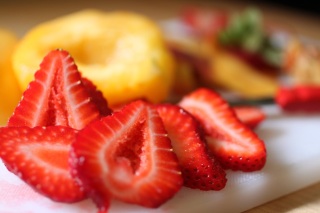 i love summer fruit, i was able to control myself and slice enough of it for the tarts.

the fruit looks a little dry and leathery.  it needs a little glaze over the top to give it a shine.

if my husband is lucky, i will let him have a bite or two…

7 thoughts on “baked yogurt tart with summer fruit; a tuesdays with dorie post”