Skip to content
having lived in the south for a while, i have come to appreciate many “southern” foods.  sorghum has to be pretty close to the top spot on the list.  how can you not love hummingbird cake or homemade chess pie?  didn’t think i could but when they are homemade using a good, handed down from generation to generation recipe, both are hard to pass up.  never mind the stuff that is mass produced and sold in the grocery store; we won’t even talk about what they sell in the mini mart at the gas station…
where am i going with this?  pimento cheese, that’s where.  for years, i would see the tubs of bright yellow/orange goo in the cheese section of the grocery store and wonder who could eat that-why would they eat that?  then i had my first taste of good homemade pimento cheese.  those of you who have lived in nashville longer than i have will most likely remember a little shop in green hills, clayton blackmon.  two ladies owned the shop, it grew out of their successful catering business, and if you ask me, they made the best pimento cheese, ever.  by using a blend of freshly grated cheeses, possibly mild cheddar or colby and monterey jack, and mixing it with pimentos and mayonnaise, it was amazing.  and until recently, i didn’t think i could ever find something close to it.
when my coworkers and i went to the beard house in february, we served the guests at the event pimento cheese made from a family recipe of one of our team members that had been handed down several generations.  that started me on a quest to find the recipe to make pimento cheese like the one that lives in my memory… 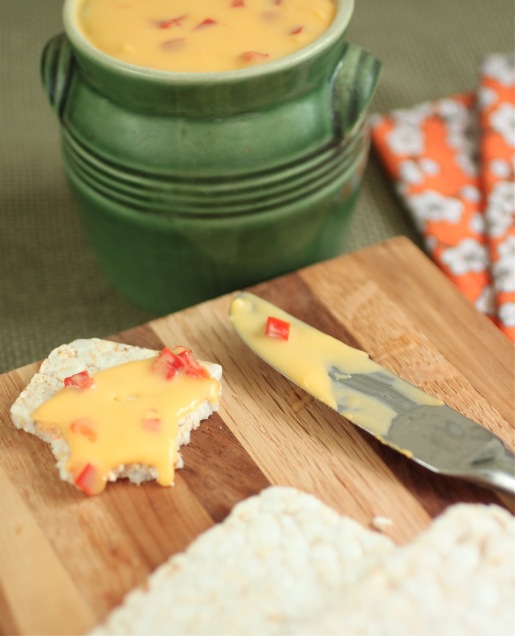 this batch was made from the recipe we used at the beard house.  it produces a spread that is almost like a dip.  it is dangerous-you can spread it on crackers or bread and before you know it, you’ve eaten the whole batch…to make this for yourself, visit the loveless website for the recipe.  to see pictures from the trip to new york city and the dinner, part 1, part 2. 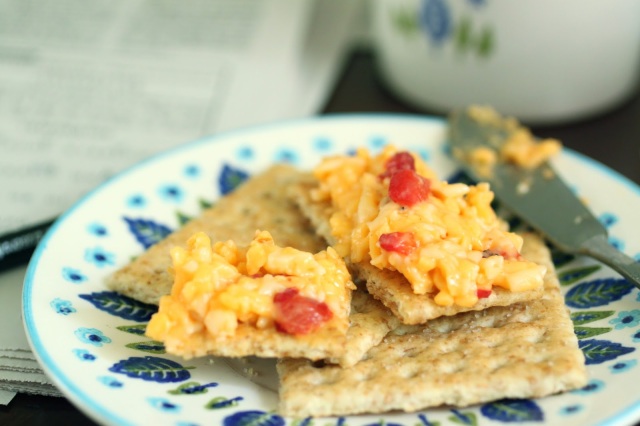 being who i am, i had to try my own take on this recipe.  first stop was the deli counter in the grocery store; i had them hack me off a thick slab of the american cheese that they sell by the pound.  it is the american cheese i grew up with.  my mother never bought the stuff that comes wrapped by the slice.  then i grabbed a piece of smoked gouda.  first i shredded the cheese and then by using the food processor and pulsing it carefully to combine it with the buttermilk, i was able to get a chunky consistency.  while it isn’t as creamy at first, it does soften and almost liquefy as it sits because the buttermilk does that to the cheese.  it was just as deadly to my waistline and cholesterol count as the previous batch. 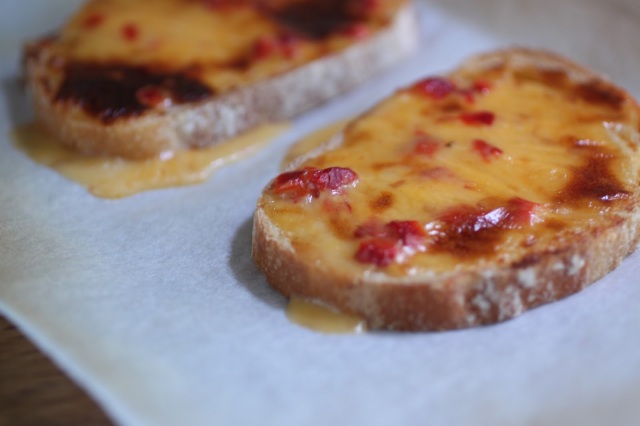 then i made an open face grilled cheese sandwich with it.  need to step away from the cheese!  try making the recipe by substituting the amounts ounce for ounce with your favorite blend of cheeses.  you will not regret this, trust me. 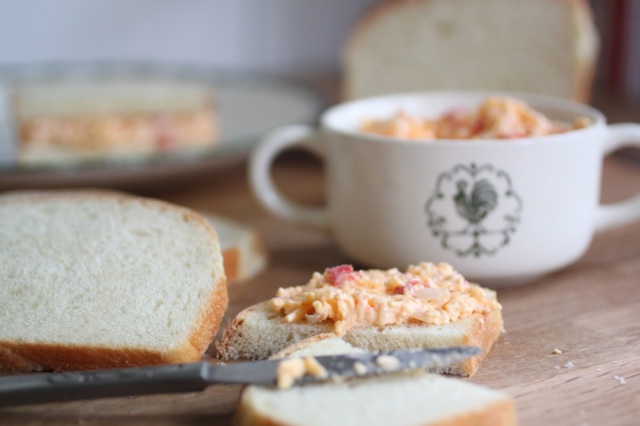 like many others, once i get started on something, i cannot stop.  when i go to the monthly pot luck dinner held by the master gardeners, i asked a fellow member for her recipe.  she frequently brings pimento cheese sandwiches to the dinners and i almost always grab one.  katherine’s recipe is rather simple.  half a pound of shredded mild cheddar cheese, a little minced raw onion, a small jar of diced pimentos with the juice and enough mayonnaise to hold it together which ends up being a few tablespoons.  mix it all up and let it sit a while.  then spread it on fresh bread for wonderful snacks or put it on crackers.  be warned, you may have to step away from the counter to prevent it from disappearing. 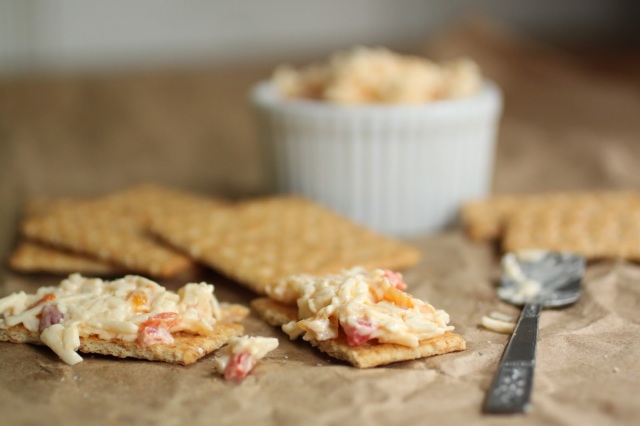 for my version, i went with some white cheeses; medium white cheddar and gruyere.  a jar of roasted red and yellow peppers from trader joe’s came in handy since my garden was lacking bell peppers and  i used some unsweetened mayonnaise to hold it together.  this stuff was awesome and i am no longer wondering how they made it-now i have a small arsenal of recipes and a plethora of cheeses available to try out.  this could get dangerous…