Skip to content
the dessert featured this week is butterscotch pudding. ever since i was little, i have had a thing for the hard yellow disk shaped candies-sweet and buttery and a little salty too. butter rum lifesavers were also a favorite of mine. so it shouldn’t be a surprise that i would like butterscotch pudding unless you have tasted the stuff in the box-eww…same goes for the chips that are used to make cookies-they don’t taste anything like butterscotch! many recipes that call themselves butterscotch just include brown sugar and butter-close, but…to really get the flavor of the hard candies, you need to combine 3 things: caramelized brown sugar, dark rum and kosher salt.
//www.youtube.com/get_player
burning the sugar is tricky. take it too far and it will scorch the pot and you will have lovely black flakes in the pudding. (doesn’t that sound like experience talking?) 265 degrees is as far as you want to go, so use a thermometer. (the hoods in the kitchen are loud-you may want to turn off the volume for this video) 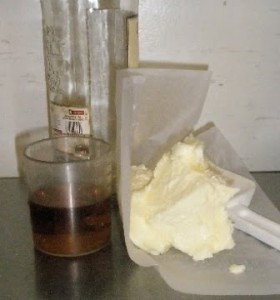 a lovely little dish of pudding

be sure to hide it from the wait staff…
come on in and taste the book!
this week’s assignment: pudding. not very exciting, i know. even so, if you stop and replay your childhood, there are memories of pudding lurking in the shadows. little dishes of creamy pudding with a dollop of whipped cream (most likely shot straight out of a can or spooned out from the tub and plopped on top). vanilla, chocolate, butterscotch or something more substantial like tapioca or rice pudding. maybe you were lucky enough to have a family member who made bread pudding on special occasions, i never did. my husband always mentions kugel when it comes to pudding, specifically noodle kugel; he does come from a jewish family so that shouldn’t surprise anyone. when i was a kid, we had pudding on occasion. open the box, follow the directions and presto, pudding in a cup. if not a box, premade cups of it were purchased from time to time. i even remember visiting the deli down the street(showing my yankee heritage here, we had delis in every town) and buying rice pudding by the pound-a quarter pound goes a long way! mostly, i remember my mother making tapioca pudding. every now and then, she would buy a box of mix and make it. she would pour it into little pyrex bowls and sprinkle a tiny bit of nutmeg over the top. my mom is not a baker and she didn’t make many desserts at home besides cookies but she would make two things that i still remember; angelfood cake and tapioca pudding. i still like it. as weird as the texture is, i find something comforting about it.

a flight of puddings to satisfy everyone at the table. from front to back; vanilla, chocolate, tapioca and butterscotch.

rice pudding is fun to experiment with. there are so many different rices out there. from front to back; arborio(the creamiest), basmati(most flavorful) and long grain(unremarkable when compared to the other two).

for the truly decadent-bread pudding, loveless style. what is that? well, at the loveless when we close at the end of the night, there are always a bunch of biscuits leftover. it is our policy to never run out before we close so that everyone eating has a chance to eat their fill of fresh hot biscuits. it seems like such a waste to toss them out but let’s be honest, cold biscuits taste awful! rather than toss them, i occasionally collect them and make a pan (or two) of bread pudding and it is served warm with a drizzle of drunken caramel( i can hear some groans and even a gasp or two, not the drunk thing again!!!). recently, i was faced with a small mountain of stale brownies that had been leftover from a catering order and once again, i hated to waste them. this thought occurred to me: since i knew that making a chocolate custard for a bread pudding was tricky since they tend to layer upon baking(meaning that the chocolate can settle to the bottom of the dish and the top of the custard is a little lacking and light on the chocolate) why not try making it chocolate by using brownies instead of the chocolate custard…let’s just say this, the possums in the garden will not be feasting on brownie bread pudding and neither will the neighbors. we may be waddling around for a while though.