last sunday was a day like no other. while i have lived through more than a few really rainy days, never have i experienced rain like this. i was awakened by the sound of my husbands voice telling me to get out of bed now! he was already awake because of the awful thunderstorm we had earlier and according to the weather report, the straight line winds headed our way were too dangerous for me to be lollygagging in bed any longer. that scraggly old locust tree just might fall this time and if it did, the chances of it landing on the roof above the bedroom were pretty good. now in my own defense, i was tired; we had spent about 4 hours on saturday bailing out the basement from the first 6+ inches of rain that fell. sunday wasn’t going to be any better with the forecast of at least another 6+ inches of rain to come. and come it did. the official measurement at the airport was a bit lower than what we had in our part of town. we had somewhere between 16 and 18 inches of rain in that 48 hour period.

we spent much of the early morning glued to the tv weather report. we sat there sipping coffee and staring at the images on the screen and worrying about our own house and the damage that was being done by the water seeping in. as we sat, darry worried about getting the water out and i could not convince him to wait for it to stop falling to bail it out. what was the point of doing all the work if it was only going fill right back up? no matter what i said, i lost the battle and darry wandered down to the basement, push broom in hand, and he began his half day of sweeping the water out through the carport doors. not me, i stayed upstairs and reveled in the fact that we still had electricity, cable tv and internet service. so i decided to keep busy and work on a few recipes. cheesecake recipes to be specific and the result was a trio of cheesecakes worthy of a golden girls reunion show. dorothy, blanche, rose and sofia would be so proud…
perfect cheesecakes are easy to bake. forget about using the name brand cream cheese, you know the one named for some yankee locale. it may be creamy but it liquifies when you mix it up with other things and it just isn’t a good texture. use a food processor to mix the batter because it will not incorporate air and excess air is what makes a cheesecake that soufflees and cracks. and last but not least-throw away your springform pan and the stupid water bath!!! those pans leak, they make a mess in the oven and they are a thin gauge which makes it easy to overbake the cake. and that water bath-just plain crazy as well as unnecessary. what kind of pan should you use? a heavy gauge aluminum cake pan, trust me on this. just bake the cake the day before you need it, let it chill over night and then follow these easy steps to unmold the cake. 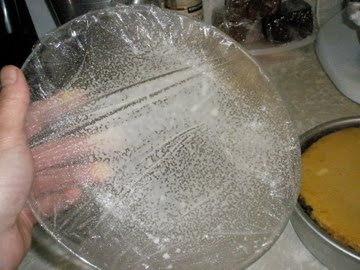 take a flat tray or plate and wrap it with plastic and grease it.

place the pan on the burner of the stove for a minute on low heat. the idea is to gently warm the cake bottom to loosen it. then give it a side to side shake to make sure the cake has released from the pan.

invert the pan and the cake should just slide out. sometimes you may need to shake it a bit but it will slide out easily. 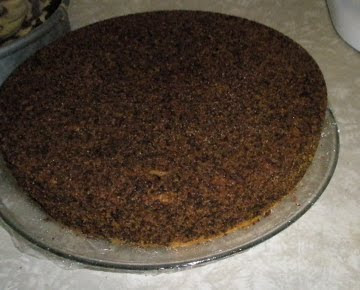 and here it is, out of the pan and upside down. put your serving tray over it and invert it again. voila, cheesecake!
(sorry but the photo of that last step looked a little like one that a tipsy cake would have taken and i just couldn’t use it

what kind of cakes did i make? these are some that i feature at the cafe from time to time. this one is banana split. banana cheesecake with a chocolate cookie crust and a chocolate swirl with strawberry sauce. you could easily add more fruit; bananas, pineapple or strawberry slices.

key lime in a gingerbread crust with a white chocolate whipped cream topping. 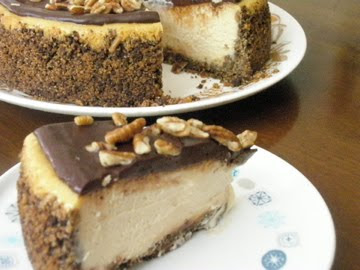 last up is turtle. caramel cheesecake in a mixed nut cookie crust with chocolate topping and pecans. for this one, you can make your own caramel sauce and use some in the cake and some for garnish or you could buy some cajeta.
the storms have passed and we will recover. we are fortunate when compared to so many others, including several of my loveless coworkers. if you want to help, check out the community foundation to make donations or hands on nashville if you want to volunteer.
one other bit of information:

Music City Keep on Playin’ – A Benefit for Flood Relief

May 16 on Great American Country Television

so if you are looking for ways to donate, there are several options. thanks, we appreciate the help!