After a weeks absence, I am back in the kitchen, completely.  Let’s just say that if you have the chance to avoid the flu-do it.  It has been more than 10 years since I was that sick and honestly, I hope it doesn’t happen again for a long time!  The simplicity of this recipe was the perfect way to ease back into the kitchen.

The recipe for Marquise au Chocolat makes a large, rich loaf of frozen chocolate mousse which is meant to be served in slices.  Since there are just two of us, I cut the recipe and made only a quarter of the batch and since it was so small, I made the decision to press the filling into a six-inch round cake pan that I had lined with lady fingers.  This will be the perfect little pick-me-up since I also spiked it with some single barrel Kentucky Bourbon.  Finally, a drizzle of blackberry syrup and a few plump berries and dessert is served!  Something tells me my husband will not think twice about eating this one! 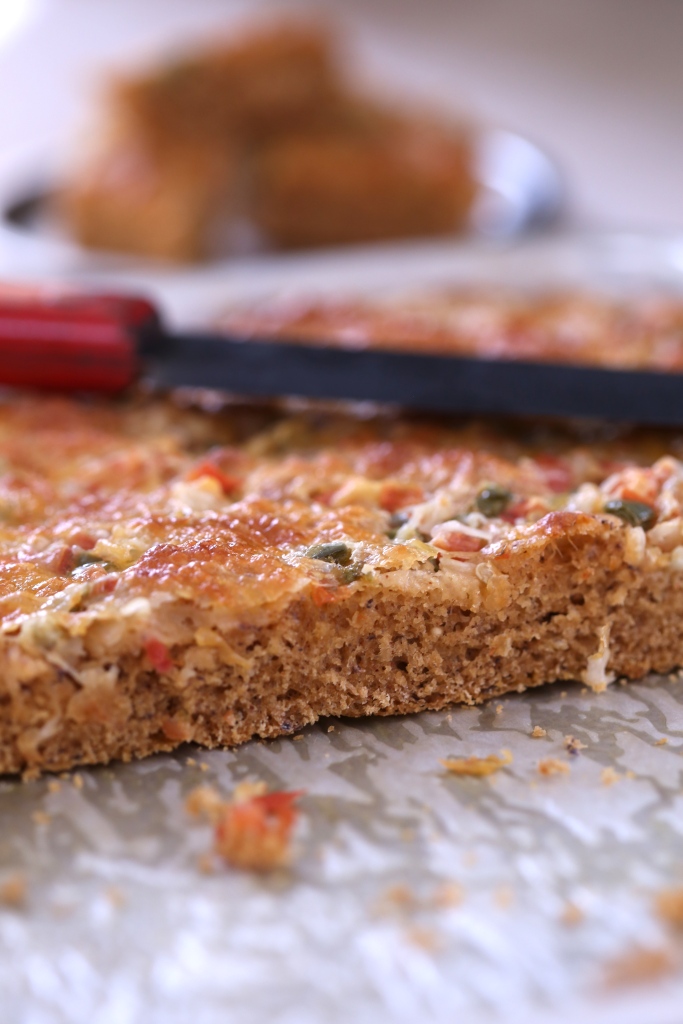 As I mentioned earlier, I was sick last week, came down with it all so that I was too sick to make the Salsa Quitza which was my plan for Superbowl Sunday.  We were supposed to go to a friends house to watch the game but since we were both miserable, we sprawled out on the couch and did not move all day.  Needless to say, my plan of making the quitza to bring to the party was cancelled.  If you ask me, that wasn’t such a bad thing.  Honestly, I was doubting the results as stated in the recipe and after reading the comments from plenty of the other bakers last Tuesday, I am glad I had a chance to follow my personal instincts.

The idea of spreading the dough out into a large cake pan and topping it with cream cheese had me thinking it would be messy to eat and for the two of us, just too cheesey.  My bakers sense (kinda like Spiderman’s “spidey” sense…) had me thinking it would make a nice focaccia.  Guess what-it did!  With just half a batch of dough, I made a quarter sheet pan sized piece of focaccia that was the perfect side dish for our dinner of grilled swordfish and salad. 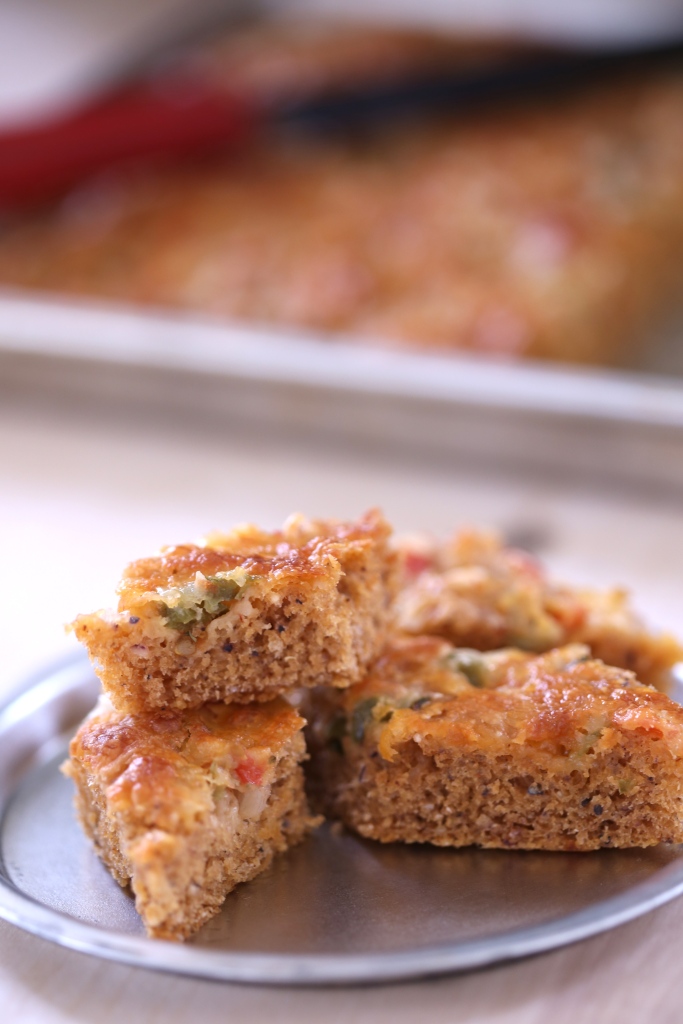 If you want to make this the way I did, use blue corn meal.  Believe it or not, it doesn’t lend any color to the dough but it does add a nice nutty flavor along with dark flecks and crunch.  Several bakers commented on the salsa being really wet and I honestly think that the recipe probably should call for “pico de gallo” and not chunky salsa.  If you aren’t familiar with pico de gallo, it is a fresh mixture of finely chopped tomatoes, peppers, onions and cilantro with lemon juice.  I measured out nearly a cup and let it sit in a strainer for about an hour to drip dry and then sprinkled it over the top of the dough after shaping.  A generous topping of shredded Mexican cheeses over the salsa and then into the oven it went.  It baked up fast, just 20 minutes and it was done.  After cooling for a while, I sliced off strips and cut them into diamonds; two-bite pieces to pair with dinner.

The dough itself was fairly easy to make with a mixer if you do not have a bread machine.  It was a bit soft and sticky but after mixing it for about 2 minutes, I turned the mixer off and let the dough sit in the bowl for 10 minutes.  This rest, autolyse is the technical term, let the dough absorb all of moisture and as a result, it was not quite as sticky as it could have been.  This is definitely a dough recipe worth having in my repertoire.  It just might make another appearance in my kitchen.

To see what the other bakers came up with, visit the Tuesdays with Dorie website and look for the LYL (leave your links) page.  If this seems interesting to you, consider baking along with us as we prepare each of the recipes in Baking with Julia and Baking Chez Moi.  You will have to purchase or borrow the books if you do not already have them; out of respect for the author, we do not publish the recipes!

12 thoughts on “marquise au chocolat and salsa quitza; a tuesdays with dorie post”