My mother gave me several issues of the magazine Saveur that she was finished with.  They have been sitting on the coffee table in the living room for several months and recently, I found myself flipping through one, Issue 182 from April 2016.  The cover promised a Taste of Sicily, and I went through the article in search of bread recipes and I wasn’t disappointed.

Scaccia is favorite snack food in Sicily and can be easily found in shops and is made with many thin layers of semolina bread stacked with tomato sauce and a traditional cheese called Caciocavallo, a traditional stretched cheese curd.  Having never traveled to Sicily, I will accept that fact and add this to it, it is not easy to find here!  The recipe looked easy enough and after checking my pantry for semolina flour, I mixed up a batch of the dough.  This recipe instructs you to also make the tomato sauce but I suspect that you could use just about any sauce, homemade or purchased.  Caciocavallo, which translates as cheese on horseback in English, is similar to Provolone in flavor and is made from either sheep or cow’s milk and as much as I would like to try it, I didn’t go out in search of it and just substituted some grated Asiago. 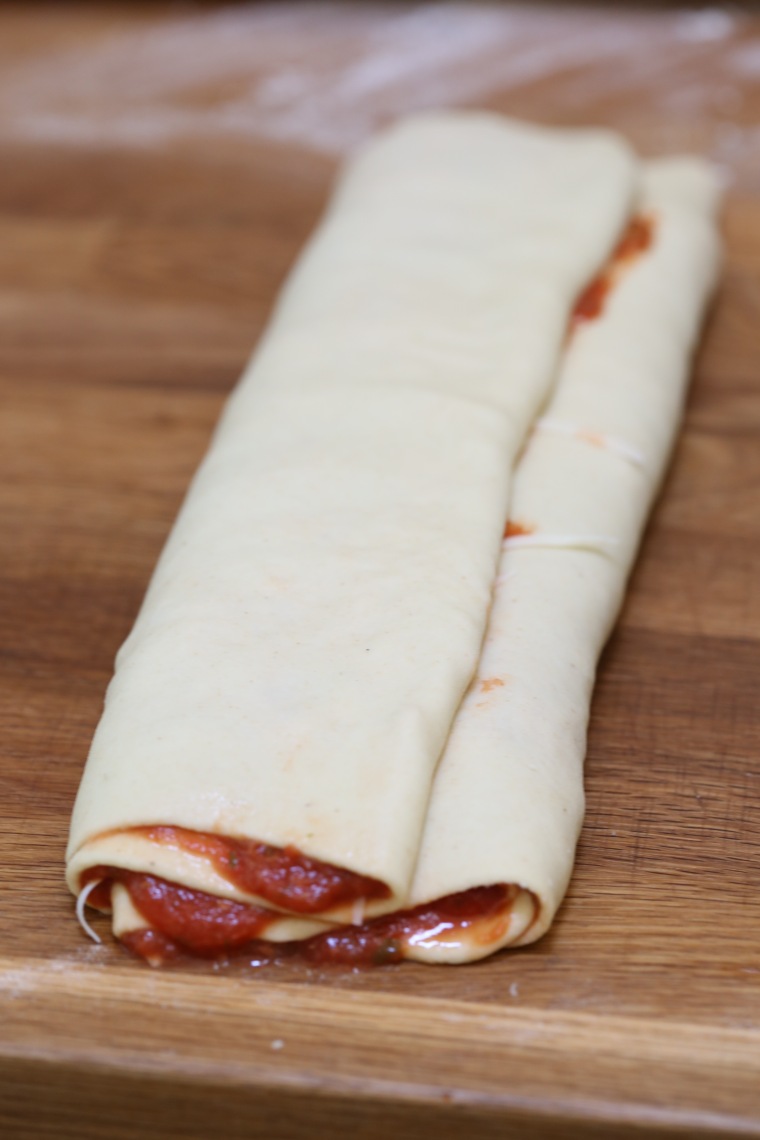 First, the dough is rolled out into a large rectangle.  The result is a very thin sheet which gets topped with sauce and cheese before being folded up.  Then more sauce and cheese, more folding and finally, a log of layered dough, sauce and cheese is folded in half  and placed into a pan lined with parchment paper.

The loaf is not given a rising period but I did let mine sit for at least 30 minutes while the oven preheated.

Looking at the loaf, I was worried.  Knowing that only 1/4 teaspoon of yeast was used to leaven the dough was obvious; it did not appear to rise much, if at all.

After baking the loaf for nearly and hour, I was surprised to see that it did rise a small amount.  The aroma that filled the kitchen was undeniably that of lasagna or of a similar baked tomato sauce and pasta dish.  Having waited for about 20 minutes, I carefully sliced into loaf and revealed the layers of spongy dough, tomato sauce and cheese.  Not only did it smell like lasagna, it tasted like it too, both in flavor as well as the texture of the interior.

The verdict, this is a recipe that I will turn to when I want something besides the usual layers of pasta, sauce and cheese, especially for a pot luck or picnic-it travels well and can left to cool, sliced an hour or two later without being reheated.  This recipe has a lot of potential for variations.  The sauce could be varied; pesto, alfredo, butternut squash and mushrooms all come to mind.  Even the cheese could be swapped but, I look forward to finding a chunk of Caciocavallo so that I can taste it.

If you can find a copy of issue 182, open it to page 70 and get to work, take note that a detailed set of instructions with illustrations on the folding methods is also included on page 74.  For those of you that would rather just see the recipe, rejoice!  Saveur magazine has the recipe posted on their website and it is available for free, find the recipe here, and the folding instructions here. 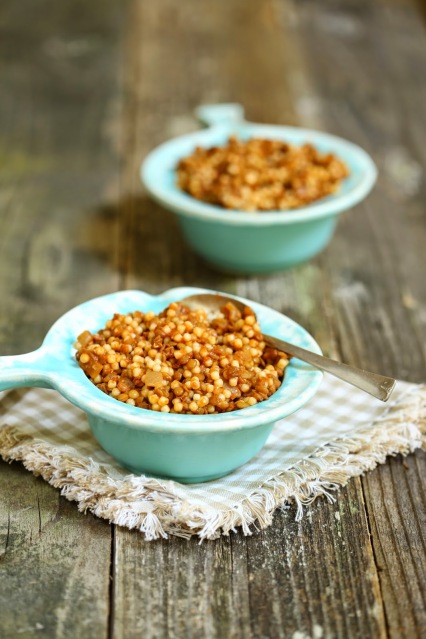 while growing up, i did not experience much in the way of exotic or ethnic food.  my mother stuck to the basics and although the meals were usually simple, they were also prepared from scratch and memorable.  her stuffed cabbage, meatloaf and scallopini come to mind but nothing stands out more in my memory than the few recipes that my great-grandmother taught her to make.  of course, tomato sauce with meatballs tops that list but lentils with pasta is a very close second.

perhaps it is just that i am in a new city and away from everything i was accustomed to.  maybe it is a touch of homesickness even though nashville was not my hometown.  what ever the reason is, i chose to make a pot of lentils with pasta the first time i decided to cook a meal in my new kitchen.

lentils are so flexible in the kitchen; they can be so many things.  personally, i have used them as a meat substitute in a vegetarian burger, in soups as both a garnish and the main ingredient and in countless recipes that were side dishes served with other items.  in this dish, they are the star.  the ingredient list for this recipe is short and you can choose to keep it that way or you can add to it if you like.  while i generally prepare this so that the result is a protein packed vegan dish, you could easily change that simply by swapping out the vegetable broth for one made with meat or poultry.   go ahead, make a batch, put it in the fridge and eat it all week long, it holds up well and can even be frozen and served later on a day that you just need a little comfort food.

a few notes about the recipe:  my great grandmother typically used tubettini, or little cut tubes, when she made this but you can use what you wish.  in the past, i have used ditalini, tubetti and even elbows but this time, i used acini de pepe which is shaped like little balls.  the lentils need to be cooked first and you can use whatever liquid you like to simmer them in.  for my family, this has always been a meatless dish but feel free to use whatever broth you like, or plain water if that suits you too.  keep in mind that lentils usually cook pretty quickly with a ratio of 1:2, lentils to liquid.  however, if the lentils are older, they will require more liquid, and this time, mine took almost 4 full cups of broth to get soft.  when my mother makes them, she will actually saute the onions in a little lard but i always use olive oil since i do not keep lard in the house but you can use whatever fat you like; a little smoky bacon fat might be a nice addition.  my lentils with pasta always seem a little more heavy in tomatoes than my mother’s but i like that.  this time around, i used my last pint of homemade tomato puree from the pantry but you could easily used a can of crushed or pureed tomatoes.  and finally, if you are lucky enough to have basil in the garden, cut a few sprigs and simmer them with the lentils, just remove them before mixing in the other ingredients.

place the lentils in a 4 quart sauce pot with 2 cups of broth and the tomato puree.  bring to a boil, reduce the heat to a simmer and cook the lentils until they get very soft.  add additional broth as needed to keep the lentils from getting dry or scorched.

bring a quart of salted water to a boil and cook the pasta until it is al dente.  drain the pasta, toss it with a little olive oil to keep it from sticking together and set it aside until the lentils are ready.

saute the onion in the olive oil over medium heat until translucent, add the garlic and continue to saute for a few minutes more.  the longer they cook and soften, the better;  crunchy onions just do not improve the texture in the final dish.  turn the heat down if needed to keep the garlic from scorching.  small amounts of broth can be splashed in to prevent it from burning and will deglaze the pan and add some extra flavor.  set this aside while you wait for the lentils to cook.

the lentils should be allowed to absorb most of the liquid that you cook them in which is why you do not add the full 4 cups of broth at the start.  start with 2 cups and add more, half a cup at a time as needed.  however, if you get the the soft stage and still have a bit of liquid in the pot, you can drain some off but leave it a little on the moist side so that the pasta can absorb it as the dish sits.  otherwise, it will be really dry.

using the pot that the lentils were cooked in, add the onions and the pasta to the lentils and stir to combine.   season the dish with salt and pepper as desired.  serve immediately or let it sit for a day-the flavor will get even better!