Skip to content
The June Daring Bakers’ challenge was hosted by Jasmine of Confessions of a Cardamom Addict and Annemarie of Ambrosia and Nectar. They chose a Traditional (UK) Bakewell Tart… er… pudding that was inspired by a rich baking history dating back to the 1800’s in England. 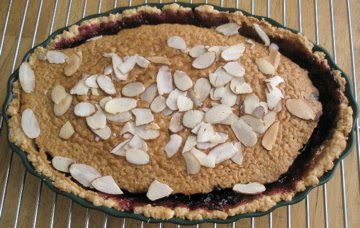 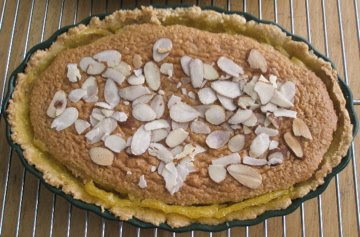 my tarts in the nifty green oval dishes i scored at the thrift store, berry jam on the top and lemon curd on the bottom

so, another challenge was upon us and it was the classic english bakewell tart or pudding depending on who you listen to. when i saw the recipe, i knew that i had made this tart many times. as a young pastry cook in a major hotel, i was making petite fours sec for high tea and we always made a version of this but we called them frangipan tartlettes. they were made with jams usually raspberry but also with a german rosehip jam and those were my favorite combination of all that we made. later on when working in san francisco, i made a different version that used a sponge cake instead of the almond filling but there was the addition of a thin circle of marzipan covering the jam which was then topped with the sponge batter and sprinkled with fresh berries before baking-usually blueberries, both the jam and the topping.

for my tarts, it was a chance to use my nifty new (from the thrift store) oval tart dishes and an excuse to make some jam. i combined blueberries, raspberries, blackberries and strawberries with some sugar, vanilla bean, star anise and cinnamon sticks and when it was almost thick enough, a little rose water for an extra burst of floral flavor. my tart dough was enough to line both pans so i only made the single batch. i lined one with the berry jam and the other with some leftover homemade lemon curd. as for the frangipan, i made it with toasted almonds and left out the extract. it was a nice trip down memory lane and now i have a big jar of jam to slather on all kinds of things!

my thanks to our hosts this month, jasmine and annemarie, you made a wonderful choice!

One thought on “can you bakewell? the daring bakers can”